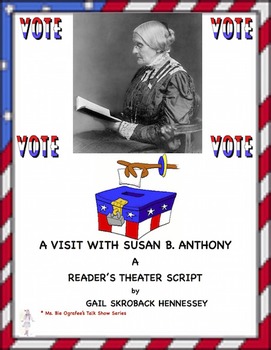 Nicknamed “the Moses of Her Sex”, Susan B. Anthony was a civil rights leader involved with the antislavery movement and the women’s rights and suffrage movement. She caused quite a commotion when, in 1872, she tried to do something most unusual for a woman. She attempted to vote in a presidential election.

Great for American History lesson, for women's history month, or for a biography day!

Other Resources You May Find of Interest:

Women’s History month is celebrated each March. It was President Jimmy Carter who was the first president to establish the week of March 8 as National Women’s History Week back in 1980. In 1986, this was made into Women History Month. There are many women who have made contributions which have shaped our world.

This webquest can be done at any time during the year.Each web question contains information on the women highlighted. Extension links/activities are included as is the key. Grades 4 and up.

Today, there are many women in the medical profession but Elizabeth was the very first woman doctor in not just the United States, but in England, too! It wasn’t easy becoming the first woman to get her degree in medicine. Still Elizabeth didn’t give up and worked even harder to change the opinions of people who thought she could never become a doctor. Great for Women's History Month or if you are looking for a biography activity to use with your students.

This fun/informative play uses the format of Blackwell being a guest on a talk show and the studio audience asks questions about her life. Ms. Bie Ografee's Talk Show Series.Includes: Comprehension/Did You Know?section extension activities/links/key.

Part of my Ms. Bie Ografee's Reader's Theater Scripts, I really had fun developing this play about the Culper Spy Ring and specifically, Agent 355, one of the female member of the organization!

Check out my other resources: https://www.teacherspayteachers.com/Store/Gail-Hennessey