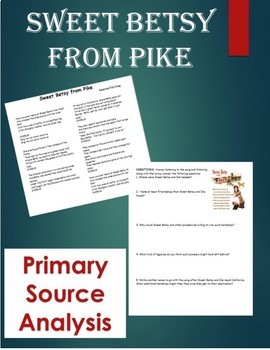 As Americans started exploring the new land in the West during the early 1800's, they faced many hardships. In this activity, students follow along with the lyrics to American folktale, "Sweet Betsy from Pike." They analyze the song to identify some of the hardships faced by the travelers, and then write a new verse describing the new challenges they faced when they got to their destination. This activity can be used as an introduction to the different groups that went west, including why they went west, what hardships they faced, and what their legacy was.