THE GREAT SHELBY HOLMES! by Elizabeth Eulberg A MYSTERY YOU WON'T FORGET! 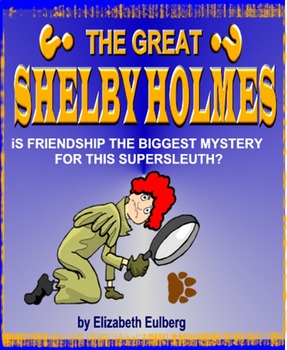 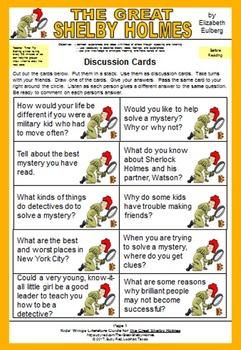 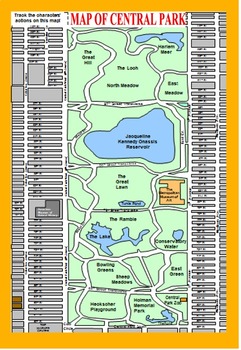 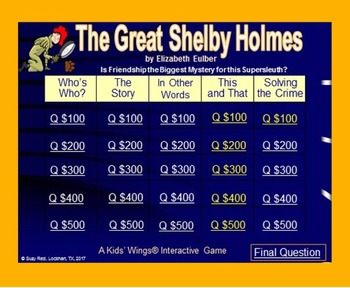 Move over, Sherlock Holmes, there's a new detective in town! She's even named after you and has named her dog Sir Arthur after your creator, Sir Arthur Conan Doyle! She's not from England like you, but she does live in a neighborhood known for crime in New York. She's quite a bit younger than you ... nine years old in fact, but because of this sassy little redheaded detective's advanced intellectual skills, she's skipped several grades. She's spunky, independent, and bossy. Like you, Master Detective Sherlock Holmes, Shelby studies crumbs of clues, expressions of people, motives that move them, words that aren't said, and opportunities that present themselves. She uses logic, measures, remembers, predicts, and confirms.

Detective Shelby Holmes is known throughout her New York Harlem neighborhood as the best, tiniest, detective who has ever solved crimes. This nine-year-old sixth grader who stands only about four feet tall may look like an unlikely sleuth, but her problem solving skills make her a stand-out. From analyzing graffiti on a store's facade to solving the most difficult of crimes through her uncanny powers of observation, Shelby gets around! She usually works alone but things begin to change when John Watson moves into the downstairs apartment.

John Watson has grown up in a military family, so he moved a lot and has learned to be responsible, friendly, polite, and well-disciplined. He and his mother moved into a Harlem apartment after his parents' divorce, but neither artillary fire and bombs going off could have prepared him for the upstairs explosion that shook him as he unpacked. So enters the scientist Shelby Holmes who introduces him to her Harlem neighbors and surprises him with her ability to solve problems and analyze people while seemingly unable to make real friends. Shelby has a hopeless sweet tooth, but can even deduce that John Watson has diabetes.

When a dognapping case presents itself, Shelby jumps on it quickly, but this time she enlists "Watson" as her sidekick and apprentice. You can join the two as they dive into the case of a prize-winning showdog who goes missing before the big show.

This mystery will inspire you to sharpen your powers of observation and friendship-building skills!

The Kids Wings Literature Guide by Master Teacher Suzy Red includes the Unit is PowerPoint for easy projection and PDF for fast, clear printing. The 63 Activities include:

Before and After Reading Discussion Cards

Create a Collage: The Perp

Who Was Sir Arthur Conan Doyle? A Research Report

Map Study: Where in the USA is New York City

Picturing the Word, A Vocabulary Project

Five in a Row

The Frayer Model for Vocabulary Research and Reporting

PLUS an interactive JEOPARDY-TYPE CULMINATING GAME!

PLEASE NOTE: Kids Wings materials are written by highly experienced master teachers and librarians. We hire professional proof readers who are also master educators. We do our best to be sure each of our literature guides is top quality and error free, and classroom tested, but if you think we can do better, we welcome your input. If you find an error in our materials, please email us at suzy@suzyred.com so we can make corrections. After it is revised, we will invite you to download a newly polished copy and will probably attach a surprise to our reply as a thank-you!

Our graphics come mostly from Art Explosion which is available to you through this link: http://amzn.to/2pdCd1x

If you like our materials, we would be very grateful if you would follow us, give us some stars, and let us and others know!

Total Pages
116 pages
Answer Key
Included
Teaching Duration
2 months
Report this Resource to TpT
Reported resources will be reviewed by our team. Report this resource to let us know if this resource violates TpT’s content guidelines.