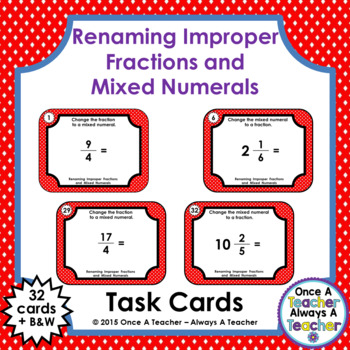 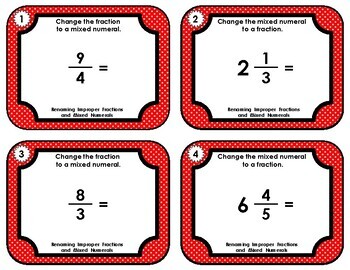 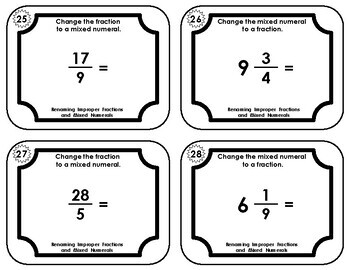 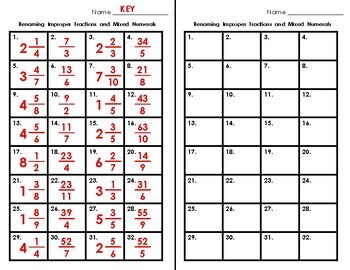 Once a Teacher Always a Teacher
572 Followers
Follow
DescriptionStandards1Reviews9Q&A

The problems presented in these cards are perfect for assessing students or maintaining skills previously learned.

The following are included in this product:

Change a fraction to a mixed numeral

Change a mixed numeral to a fraction

This packet includes 32 colorful task cards and an identical set in black and white for teachers that do not have access to colored ink. If you use the black and white set printing them on colored paper will facilitate organization of task cards.

An answer key has been provided to allow students to check their own work. A recording sheet is included or a plain sheet of paper may be used to record students’ work.

SAVE ! SAVE ! SAVE ! This product is now part of the Fractions - Bundle of Task Cards 50 % OFF the price of buying each product individually ! All the sets listed below are included in this bundle, with more to come.

Click on the links below to see additional Fraction Task Cards

Fractions - Adding and Subtracting with Unlike Denominators

Fractions - Adding and Subtracting Mixed Numbers with Like Denominators

Fractions - Adding and Subtracting Mixed Numbers with Unlike Denominators

Log in
to see state-specific standards (only available in the US).
CCSS4.NF.B.3c
Add and subtract mixed numbers with like denominators, e.g., by replacing each mixed number with an equivalent fraction, and/or by using properties of operations and the relationship between addition and subtraction.

Once a Teacher Always a Teacher