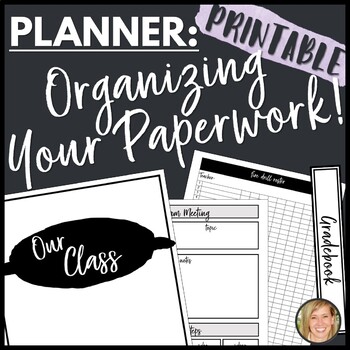 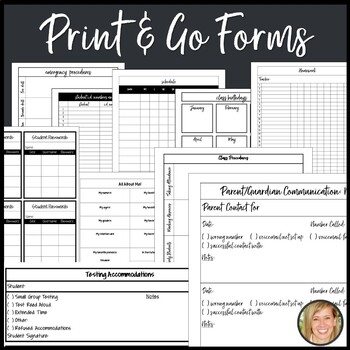 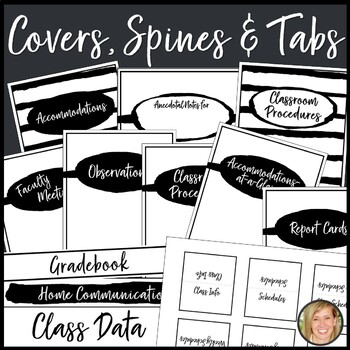 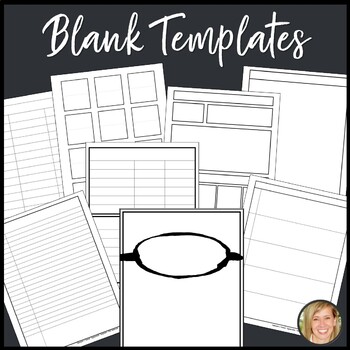 You're a teacher, so I don't have to tell you the importance of being able to organize ALL OF THAT PAPERWORK!!! This black and white resource will completely help with that task! It comes with binder spine inserts, binder covers and/or dividers, tabs for your binder, and a ton of forms and templates. (And they’re Happy Planner friendly!)

*The Preview will show you everything you get in a snap!*

This is part of a growing bundle with the same black and white watercolor theme:

*BOTH EDITABLE AND PRINTABLE VERSIONS OF THE CALENDAR ARE NOW INCLUDED!

There are two files within this set.

File 2: One type of Covers/Dividers, Tabs, and Corresponding Forms and Templates

*For every binder spine insert, there is a tab and a cover (which can also be used as a divider inside your binder) with the same wording.

*There are 2 choices for each binder spine insert (black or white background).

*There are 4 choices for each cover/divider (more or less black ink used).

*For every binder cover (which can also be used as a divider inside your binder), there is a tab with the same wording.

*Many forms and templates are included.

*Not every cover/divider needs or has forms to go with them.

Examples of covers/dividers and tabs with forms included:

Examples of covers/dividers and tabs with no forms:

Included with "The Teacher Planner: Organizing Your Paperwork"

*Each comes with binder spines, covers/dividers, and tabs. If forms or templates are included, that is indicated below.

Beginning of the Year

End of the Year

It's important to me that you get what you want. If you'd like something added to this set or if you have any questions, just let me know in the questions/comments section or you can always email me at shannahellender@gmail.com.

☑ Don't forget to leave feedback to get credit for future purchases!