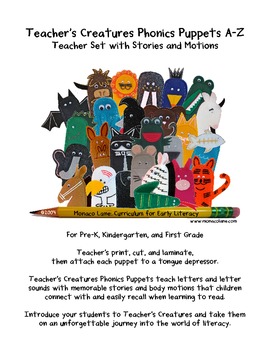 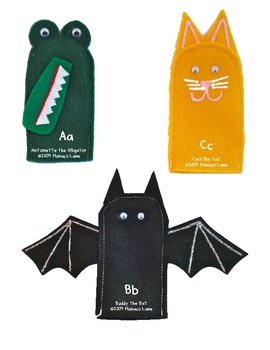 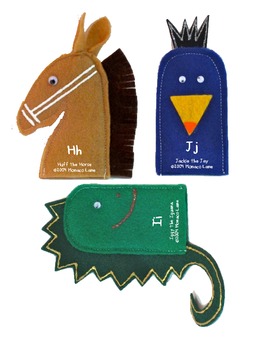 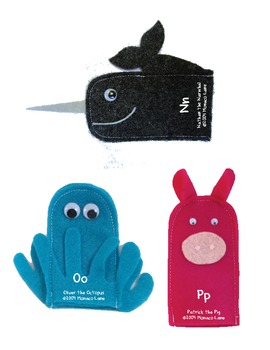 Teacher’s Creatures Phonics Puppets are a set of 26 printable alphabet stick puppets that introduce beginning readers to phonics. Each puppet tells a simple, memorable story that teaches a letter sound and corresponding body motion. A list of stories and motions is included with this set. (Each puppet also has a song that can be used instead of the story. I can send you the audio files -and lyrics- so you can learn the tune if you email me directly at teacherscreatures@comcast.net) The puppets can be printed, cut, and laminated, then attached to a tongue depressor... and you're ready to teach! Children feel a connection with Teacher's Creatures and easily recall their stories and motions (and therefore letter sounds) when learning to read.

Carl the Cat wants to catch critters quickly so he sharpens his claws on a scratching post like this: “c.c.c.” (This is the hard C sound, as in cookie.) The Motion: Pretend to scratch a post, alternating hands and making the sound of hard C with each scratch.

Rory the Raccoon likes to get into your garbage in the middle of the night. She sneaks up to the garbage can, lifts up the lid, and peeks inside like this: “rrrrrr.” The Motion: Pretend to lift a garbage can lid slowly and look inside while making the sound of R. Make your voice go up, like the lid is squeaking.

This is Rory, a sneaky raccoon. She gets into your garbage by the light of the moon. Crawls up to the can and lifts the lid up. It squeaks so loud that it wakes you up /rrrrr/!

Iggy the Iguana eats bugs for breakfast. His friends think it’s disgusting so they say “i.i.i.” (This is the Short I sound, as in icky.) The Motion: Look disgusted as you say, “i.i.i.”

Iggy's song: I know an iguana named Iggy. He eats bugs for breakfast, you see. But all of his friends think that's pretty yucky. So when he eats breakfast they say to Iggy: /i/ /i/ /i/

Search "Teacher's Creatures At Work" on Youtube to see the puppets in action!

I also have a student set available (Teacher's Creatures Phonics Puppets- Student Set to Color and Take Home) which features a black and white outline version of each puppet for printing, coloring, and attaching to a popsicle stick for students to take home.

If you purchase this item and are interested in the songs, email me at teacherscreatures@comcast.net to let me know your TPT user name and which set/s of puppets you own. I will verify your purchase and email you the songs! (This offer only applies to the "teacher sets" with stories and motions, but not the black and white "student sets".)

Log in
to see state-specific standards (only available in the US).
CCSSRF.K.2
Demonstrate understanding of spoken words, syllables, and sounds (phonemes).
CCSSRF.K.2d
Isolate and pronounce the initial, medial vowel, and final sounds (phonemes) in three-phoneme (consonant-vowel-consonant, or CVC) words. (This does not include CVCs ending with /l/, /r/, or /x/.)
CCSSRF.K.3
Know and apply grade-level phonics and word analysis skills in decoding words.
CCSSRF.K.3a
Demonstrate basic knowledge of one-to-one letter-sound correspondences by producing the primary sound or many of the most frequent sounds for each consonant.
CCSSRF.K.3d
Distinguish between similarly spelled words by identifying the sounds of the letters that differ.