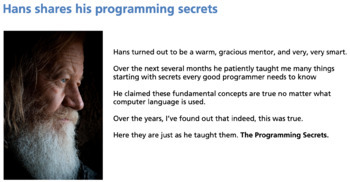 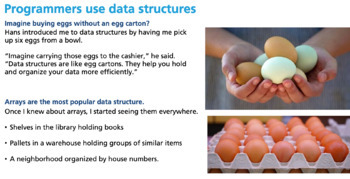 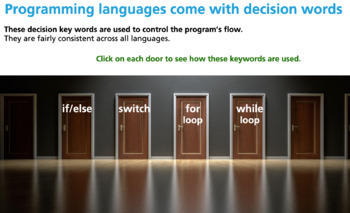 
This tutorial highlights ten of the most important programming fundamentals students need to be aware of as they begin to explore programming. These are the areas that students were often hesitant about at the end of the semester. By introducing them at the beginning of the course students will have a framework to build on as they learn programming concepts.

This can be used as a face-to-face lab or as a learning activity done online.

On completion of these learning activities the student should be able to:
- Describe why computers are exact and very picky.
- List the digits that a computer chip works with.
- List the language that programmers should use first when beginning to write a program (English) as well as describe why this is important.
- Give a metaphor for variables (a variable is a bucket).
- Describe the difference between Strings (hardwired) and variables (software)
- List the different names for functions.
- List the benefits of using functions in a program
- Describe what a language's library or API is.
- List the benefits of a pre-written library
- List the down-side of a pre-written library
- List the decision keywords that are common to all computer languages.
- Describe what a data structure is and why they are useful.
- Name a common data structure (an array)
- List two debug tools (output statements and breakpoints)
- Explain the statement "Programming is an exact science. Programming is an art." using examples.

This is part of the JavaScript Rocks! Series - A complete course in JavaScript programming.

Use these Learning Activities as part of your Introduction to Programming courses.

This learning activity was written by Peter K. Johnson from Web Explorations, LLC. It is based on 14-years of teaching web development and programming languages working with both online and face-to-face learners. Web Explorations specializes in course development.


Total Pages
21 pages
Answer Key
Included
Teaching Duration
1 hour
Report this Resource to TpT
Reported resources will be reviewed by our team. Report this resource to let us know if this resource violates TpT’s content guidelines.