The African Americans Many Rivers to Cross Episode 3 Worksheet: 1860-1896 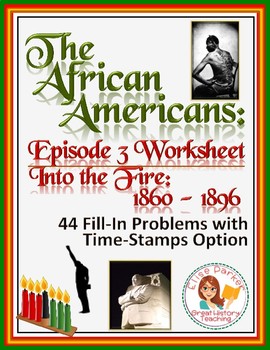 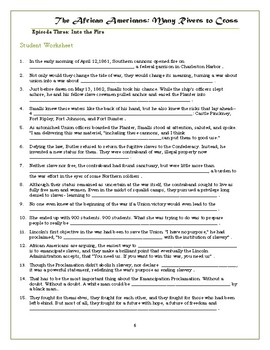 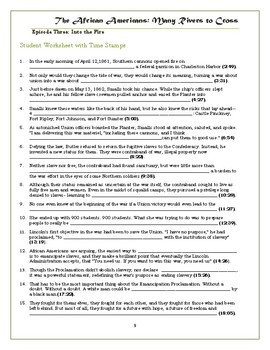 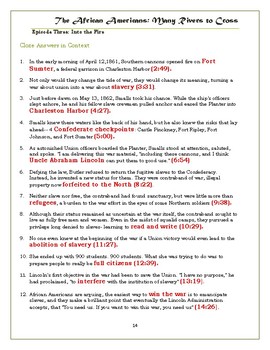 The African Americans: Many Rivers to Cross, is an award-winning six-part documentary series by noted historian Henry Louis Gates, Jr. Covering from about the year 1500 through to the new millennium, the series addresses in a detailed yet entertaining way the challenges faced by African Americans throughout these centuries as well as their many triumphs. Each episode lasts approximately one hour, making the series a convenient one to work into a typical high-school class period.

About this African Americans: Many Rivers to Cross Worksheet

This worksheet provides students with 44 fill-in-the-blank problems for them to solve as they watch Episode 3 of The African Americans: Many Rivers to Cross, which covers the period of 1860 to 1896 in African American history.

Summary of Episode 3: Into the Fire

"Into the Fire" examines the most tumultuous and consequential period in African-American history: the Civil War and the end of slavery, and Reconstruction’s thrilling but tragically brief “moment in the sun.” From the beginning, African Americans were agents of their own liberation — forcing the Union to confront the issue of slavery by fleeing the plantations, and taking up arms to serve with honor in the United States Colored Troops. After Emancipation, African Americans sought to realize the promise of freedom — rebuilding families shattered by slavery; demanding economic, political and civil rights; even winning elected office. Just a few years later, however, an intransigent South mounted a swift and vicious campaign of terror to restore white supremacy and roll back African-American rights. Yet the achievements of Reconstruction would remain very much alive in the collective memory of the African-American community.

Teaching Options with this The African Americans Episode 3 Worksheet

Because the series spans such a long era, teachers may want to use it sporadically throughout the school year to review and reinforce student learning about specific time periods. This approach will allow students to see each era through the lens of a different viewpoint immediately after going through the textbook presentation of that era. Compare/contrast activities can naturally follow, and can help students see how in many cases, their textbooks are presenting an incomplete or even biased view of history. It can also help students see how history can *look* different to those actually experiencing the events. Textbooks, by their nature, tend to be impersonal, while the series presents students with anecdotes and stories that show the impact of events on actual lives.

Another option is to reserve the series for near the end of the school year so that it can be used as a review of all of American history – again showing events from an extra-textbook viewpoint.

How These Worksheets for African Americans: Many Rivers to Cross are Structured

These The African Americans: Many Rivers to Cross worksheets present students with fill-in problems to encourage them to pay close attention to the video as it plays. Cloze problems largely eliminate the problem of students guessing, and when they are well-constructed, they have the added benefit of helping students to zero in on main ideas and key details – exactly the content they should be mastering from the video.

Each hour-long episode comes with between 40 and 70 fill-in problems, appropriately spaced out so that students can keep up. Some students, however, may feel that the pace is too brisk. In that case, teachers can simply assign some students to do the odd problems and others the evens, a strategy that can also help to discourage students from copying from classmates instead of paying attention as they should.

Some teachers like providing their students with time stamps to go with video questions, so they know when to expect the next problem. Other teachers would rather instruct students to listen carefully for the following cue sentence so they are ready to tackle the next problem.

These worksheets for The African Americans accommodate both teaching styles, including both a worksheet with a time stamp for each problem and a matching worksheet that leaves the time stamps out.

Looking for an Easy Grading Option? Here you go!

Each worksheet provides students with blanks that they can write on. While this may be the best option for some students, teachers can considering using the included student answer sheet instead. With this approach, all a student’s answers will be on a single sheet of paper, one that is formatted to exactly match the “Fast-Grade Answer Key” so that student papers can be rapidly and easily marked.

Using the student answer sheet and Fast-Grade Answer Key offers an additional benefit too – teachers can make one class set of worksheets and re-use them period after period and year after year to cut down on the time and expense of making copies! Just give students an answer sheet, remind them not to write on the worksheets themselves, and you’re good to go!

Looking to Go Over Answers with the Class?

In that case, the “Cloze Answers in Context” answer key should prove helpful because it provides teachers with the question prompts as well as the answers. This will allow teachers to read the prompt out loud and let the class or specified students announce the answer. Teachers can even designate a student leader to read the prompts and verify the answer once it’s given, providing students with the opportunity to augment their learning even further!

However you choose use these The African Americans: Many Rivers to Cross worksheets, I hope that you find the video series and entertaining and informative addition to your American history teaching materials.

LOOKING FOR A MONEY SAVING BUNDLE OF WORKSHEETS FOR ALL SIX EPISODES OF THE AFRICAN AMERICANS?

LOOKING FOR MORE SINGLE-EPISODE PACKETS OF THE AFRICAN AMERICANS WORKSHEETS? HERE ARE LINKS TO THE COMPLETE COLLECTION:

Total Pages
18 pages
Answer Key
Included
Teaching Duration
2 hours
Report this Resource to TpT
Reported resources will be reviewed by our team. Report this resource to let us know if this resource violates TpT’s content guidelines.