The Amanda Knox Case: A High-interest Project on Bias in the Media 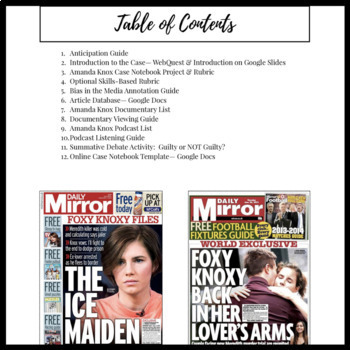 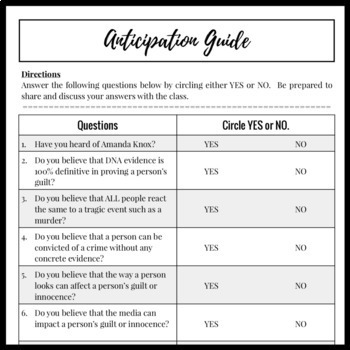 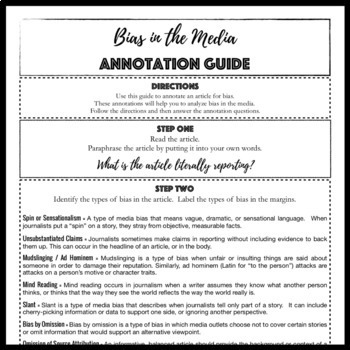 The purpose of this high-interest project is to analyze how bias in the media can shape and affect our perceptions of truth and reality by observing this influence in a criminal case... that of Amanda Knox.

To identify examples of bias in the media

To annotate news articles for bias

To compile evidence to support an argument

To make observations about the impact of bias on our beliefs

Amanda Knox was an American student who was studying abroad in Italy in 2007 when her British roommate, Meredith Kercher, was brutally murdered. Amanda Knox would go on to be found guilty of the crime, then have the verdict overturned, then be convicted again, and then finally have the verdict overturned by the Italian Supreme Court. Needless to say, the evidence on this case was complicated, and the media coverage of the case only made things worse through the bias that played out especially in the British and Italian presses.

Working with a group of peers, students will compile a case notebook on the Amanda Knox case. A case notebook is simply a notebook that contains an attorney’s compiled information on a case. The case notebook may either be a physical notebook (with sections) or an online e-book (with a hyperlinked table of contents).

This project contains a Google Docs template for students to use in order to compile their work in an online format.

The case notebook should include the following FOUR sections:

Articles from the case, annotated for bias, with paragraph explanations of how the article shows bias

After students compile the case notebook, they will hold a class debate on Amanda Knox's guilt or innocence and then reflect back on the overall project to consider how bias can shape our "truths" or "opinions."

True crime projects such as this one are high-interest. TV shows, movies, ID Discovery, documentaries, and podcasts that involve true crime are a part of inherent, human fascination. They captivate us even though we may not know why. We also love solving puzzles and mysteries, and this project will allow students to investigate a famous case and put together evidence to arrive at their own conclusions of the "truth."

Students are sure to be engaged in this project because Amanda Knox was not much older than high school students when she was arrested and charged for a murder that she might not have committed.

Please note that the murder of Amanda Knox's roommate, Meredith Kercher, was a bloody and gruesome ordeal that involved sexual assault. As such, this project is more appropriate for high school students.

* Be sure to click the "FOLLOW" button that is located next to my picture so that you can hear about sales, new products, and freebies!

* Don't forget to leave feedback to EARN POINTS that turn into cash towards future purchases!

Jack the Ripper: Tone & Bias in the Media Coverage of this Infamous Murder Case

Log in
to see state-specific standards (only available in the US).
CCSSCCRA.L.6
Acquire and use accurately a range of general academic and domain-specific words and phrases sufficient for reading, writing, speaking, and listening at the college and career readiness level; demonstrate independence in gathering vocabulary knowledge when encountering an unknown term important to comprehension or expression.
CCSSCCRA.L.5
Demonstrate understanding of figurative language, word relationships, and nuances in word meanings.
CCSSCCRA.L.4
Determine or clarify the meaning of unknown and multiple-meaning words and phrases by using context clues, analyzing meaningful word parts, and consulting general and specialized reference materials, as appropriate.
CCSSCCRA.L.3
Apply knowledge of language to understand how language functions in different contexts, to make effective choices for meaning or style, and to comprehend more fully when reading or listening.
CCSSCCRA.L.2
Demonstrate command of the conventions of standard English capitalization, punctuation, and spelling when writing.