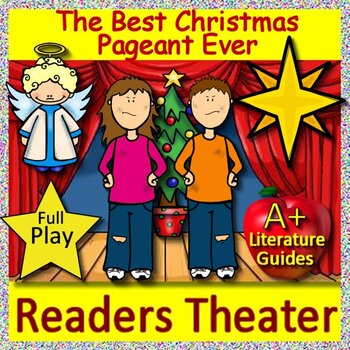 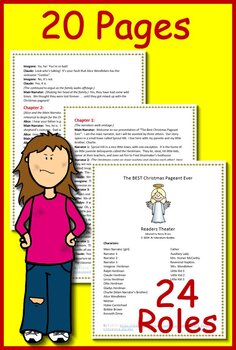 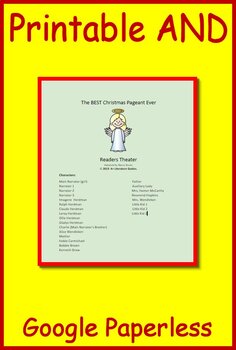 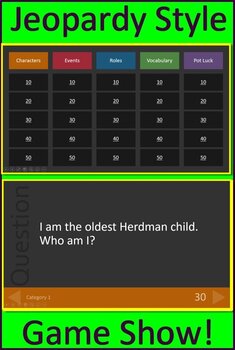 This is a full length play (readers theater) for The Best Christmas Pageant Ever by Barbara Robinson. It covers all 7 chapters, and has 24 roles. A Jeopardy style PowerPoint review game is also included for added fun!

The Readers Theater Includes:
24 roles
20 page script including all 7 chapters
Printable pages for the script
Google Doc link for paperless copies with instructions

This play can be used with or without the novel. Students can simply have fun performing this play by itself. It can also be used in conjunction with the novel. After each chapter, the students can read aloud the readers theater section that goes along with each chapter for better understanding of the novel. In addition, the teacher can also wait until the class has finished reading the novel, and then have the students perform the readers theater as a final book review before a final test. Finally, this play can also be used as a school production.

The script follows the events of the novel, but some events have been streamlined to flow better in play form. The character lines are similar to the novel, but not exact. It is against copyright laws to copy the exact lines from the novel. The meaning behind the lines, however, has been preserved.

The pages are printable, however, a Google doc link has also been provided for paperless copies. This is perfect for Chromebooks, ipads, desktops, laptops, cell phones, etc. Both versions are included with your purchase.

Press Below to purchase the full novel guide, that also has the readers theater:

The BEST Christmas Pageant Ever Literature Guide with Readers Theater

Total Pages
52 pages
Answer Key
Included
Teaching Duration
3 Weeks
Report this Resource to TpT
Reported resources will be reviewed by our team. Report this resource to let us know if this resource violates TpT’s content guidelines.

A - PLUS Literature Guides

4,176 Followers
Follow
More products from A - PLUS Literature Guides