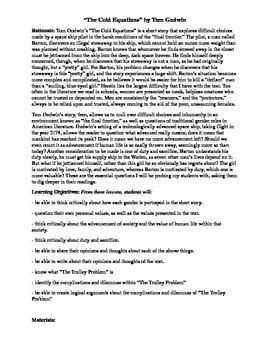 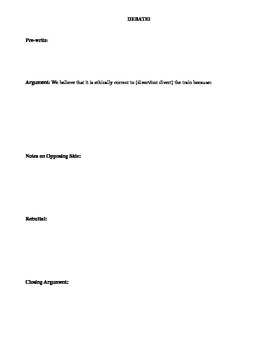 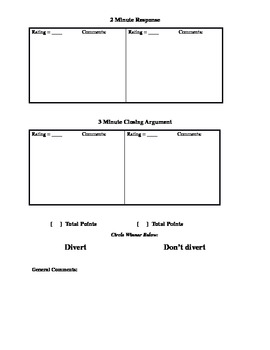 This is a two day lesson plan on Tom Godwin's "The Cold Equations" that includes rationale, objectives, materials, procedures, a reading check quiz, an ethical dilemma handout, a debate format handout and a debate judging rubric.

Day 1 of procedures includes the reading quiz and a discussion of the short story using quotes from the story. All of the questioning is included in the lesson plan. Your discussion will revolve around how Godwin writes Marilyn as a "little girl" naive to the ways of the world, when what she did took a lot of courage. This part of the lesson asks students to examine stereotyping, societal expectations, and gender roles.

Day 2 of procedures asks students to look at the story from an ethical standpoint. The big question students will examine is: Do you believe the rule that states, ”any stowaway discovered in an EDS shall be jettisoned immediately following discovery” is justified? Is it too harsh of a penalty or is it a necessary evil? You will then introduce the moral paradox "The Trolley Problem" either by having students popcorn read or listening to the instructor. This could also be assigned reading for the students after day 1 of the lesson plans. The article is long, but doesn't need to be read in its entirety for the students to understand the message.
The class is then divided in half, in which one half of the class will argue to diverting the trolley to run over the one person, and the other half with argue for not diverting the trolley, so that it runs over five people. You will also need to select four volunteers to be judges (I didn't tell the students that volunteered that they would be judges, just asked for volunteers). The judges receive a debate rubric to judge the debate and choose winners. There is a writing prompt included at the end for assessment after the debate if there is time. I was wary of how the debate would go in my class, as I did it the second week and thought that maybe it was too early in the year for them to be comfortable to argue with each other, but it went very well. The students really enjoyed using this type of thinking and I loved getting to hear their arguments!


Total Pages
13 pages
Answer Key
Rubric only
Teaching Duration
2 days
Report this Resource to TpT
Reported resources will be reviewed by our team. Report this resource to let us know if this resource violates TpT’s content guidelines.