The Cuban Missile Crisis- Webquest and Video Analysis with Key 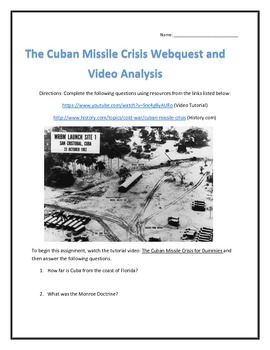 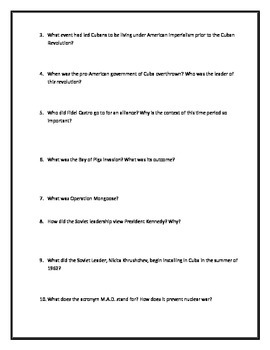 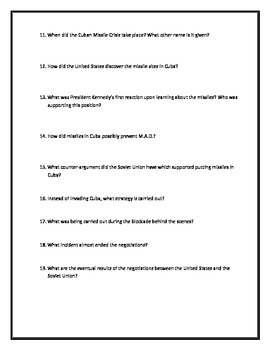 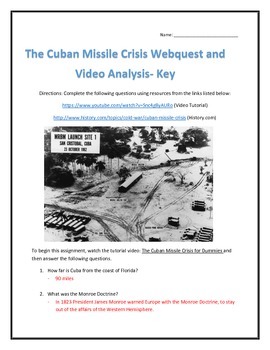 Inspire Using History
347 Followers
Follow
Compatible with Digital Devices
The Teacher-Author has indicated that this resource can be used for device-based learning.
DescriptionReviews14Q&A1

The Cuban Missile Crisis Webquest and Video Analysis with Key- this is a 10 page document that contains a webquest and a completed teacher’s key for easy marking. It contains 30 questions based on a tutorial video and the history.com website.

Students will begin this assignment by watching an online tutorial video:The Cuban Missile Crisis for Dummies. The video will introduce the time period and go over the key themes and events of the time. The video will first review events which lead to the Cuban Missile Crisis: The Monroe Doctrine, The Spanish-American War, and the Cuban Revolution led by Fidel Castro. Cuba's relations with the Soviet Union, the policy of M.A.D. (mutually assured destruction), and the Bay of Pigs Invasion are also reviewed. After all of the background info has been covered, the video goes over the 13 days in October 1962 which almost led to nuclear war. The U2 flight over Cuba which discovered the missiles, the blockade/quarantine of the island, the possible invasion of the island, and the backdoor negotiations between the two sides are all reviewed. The video concludes with the eventual ending of the crisis- the removal of nuclear weapons from Cuba by the Soviets and from Turkey by the Americans. Following the video, students will proceed to the history.com website to read an article about the Cuban Missile Crisis. The article will give students a greater understanding of the difficult situation that president Kennedy was forced to deal with. A link is provided for students to watch the actual address the JFK gave the American people upon the discovery of missiles in Cuba. The article does a good job at covering many of the topics from the video in greater detail, such as the U2 spy plane, the blockade, and the eventual conclusion of the crisis.

This webquest can be easily used as an introduction to the topic, a study guide, or a quick and easy sub plan.

Total Pages
10 pages
Answer Key
Included
Teaching Duration
1 hour
Report this Resource to TpT
Reported resources will be reviewed by our team. Report this resource to let us know if this resource violates TpT’s content guidelines.