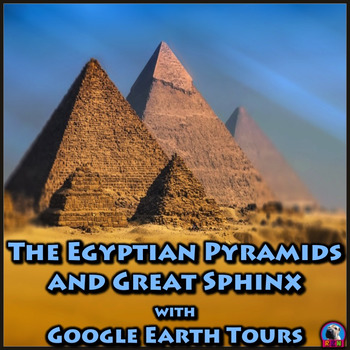 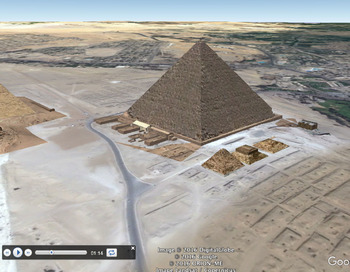 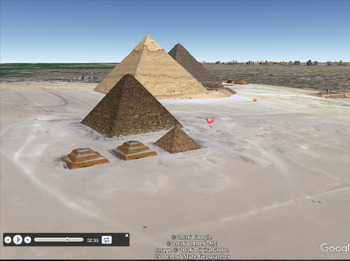 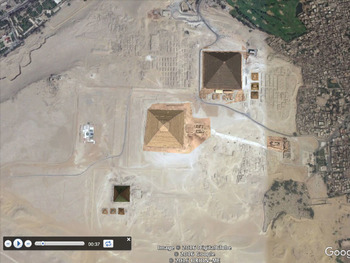 Tour The Great Pyramids and Sphinx of Giza with Google Earth.

Make a virtual field trip to one of Africa’s most famous landmarks; The Pyramids of Egypt and giant Sphinx. You will be using Google Earth to watch a pre-recorded tour of the Pyramids of Khufu, Khafre, Menkaure, as well as, the Great Sphinx. The trip lasts for 3 minutes and 15 seconds.

The product includes a document of about 40 talking points and interesting facts about the ancient Egyptian site.

The tour is also accompanied by a pdf that describes what you are seeing based on the corresponding minutes in the video. This is so you can pause the tour at the given time stamp and let the class know what they are looking at.

For example the document says at, “:26 – :39 – The camera zooms all the way down and positions itself above the ancient necropolis. The three pyramids and their companion structures are all clearly in view.

a. The western edge of Cairo is on the left of the screen. The river like line that meanders in between two of the pyramids is a walking path created for tourists.

b. Khufu’s Pyramid is the on the northern side. Khafre’s is in the middle and Menkaure’s is the small one to the southwest of the other two.

c. The Great Sphinx is located due east of Khafre’s Pyramid. Follow the white line (the causeway) heading east and you will see it.”

Finally, a very brief PowerPoint can be found in the product that illustrates and describes the basic structures of a pyramid complex.

The tour begins with a view of Africa from outer space. You are then zoomed in to the site’s locations to see it from a few different viewpoints. The angles are chosen so the students can get a good idea of the four structures’ locations, as well as, their physical relationships to each other in their setting. Finally, you are taken back out to a long shot of Africa.

All my PowerPoints can be found on this Pinterest Page.

The cover photo is by Walkerssk and has a Creative Commons license. The photo can be found @ https://pixabay.com/en/giza-pyramid-pyramids-of-giza-egypt-1756946/

US DEPT of State Geographer

Total Pages
14 pages
Answer Key
Does not apply
Teaching Duration
N/A
Report this Resource to TpT
Reported resources will be reviewed by our team. Report this resource to let us know if this resource violates TpT’s content guidelines.