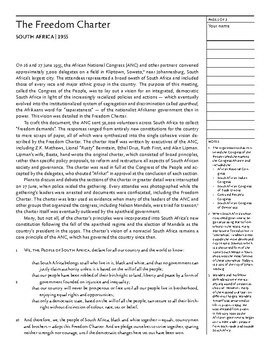 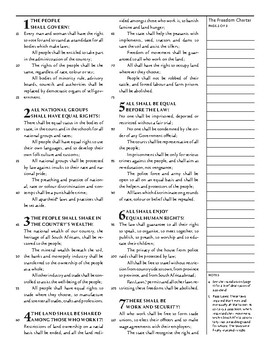 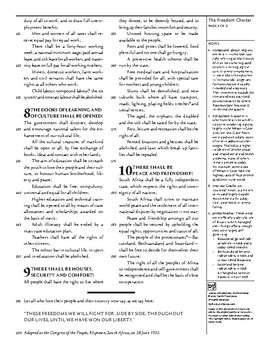 In 1955, leaders of the African National Congress (ANC) composed the Freedom Charter, a declaration of broad principles on which to base an integrated and democratic South Africa. This charter was read and accepted at a large, multiracial gathering in Soweto called the Congress of the People on 26 June of that year. The ideas in the charter were based on “freedom demands” collected from townships and homelands across South Africa and stood in stark contrast to the increasingly racialized policies and actions, which eventually evolved into apartheid, of the nationalist Afrikaner government then in power. The document was later outlawed by the Afrikaner government and used as evidence when Nelson Mandela and other ANC leaders were tried for treason. Many of the charter’s principles were incorporated into South Africa’s new constitution following the fall of the apartheid regime and the election of Mandela as the country’s president in the 1990s. The vision of a nonracial South Africa laid out in the Freedom Charter remains a core principle of the ANC, which has governed the country since then.

This handout contains the complete text of the Freedom Charter and is designed with classroom needs in mind. A thoughtful introduction and substantial footnotes provide context and additional information to the reader. The text is set in easy-to-read, 11-point type. Lines of text are numbered for easy reference in classroom discussion. A lined section on the right side of the page provides space for the reader to take notes. (These lines use the same spacing as college-ruled notepaper.) The document’s title as well as country and year of publication are clearly indicated. The handout is optimized for black-and-white printing and to save printer/photocopier ink/toner to reduce your printing costs.

Note that some, but not all, versions of the Freedom Charter number the document’s 10 sections. The section numbers have been included in this version to aid and enhance individual study and classroom discussion.