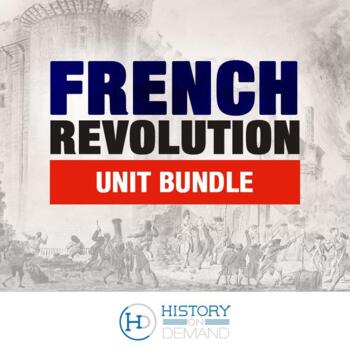 History on Demand
163 Followers
Follow
Compatible with Digital Devices
The Teacher-Author has indicated that this resource can be used for device-based learning.

This bundle is designed for middle, high, and home school school students and covers important details about the French Revolution, from its earliest stages through the rise of Napoleon Bonaparte. It may be presented by the teacher as whole class instruction, virtual instruction or may be posted on a class blog to be used independently by students along with the guided outline.

HISTORY ON DEMAND presentations include clear and concise textual and graphical elements such as timelines, social pyramids, maps, and charts to address a variety of student learning styles and differentiation, and to reinforce complex concepts. Our products are easily adaptable and allow great flexibility so the teacher may tailor them to students needs. The included outline is in Microsoft Word format.

***Please see our related products in our "History on Demand" store. There are an array of PowerPoint Presentations, guided outlines, video guides and other activities that work extremely well to form an entire teaching unit.

Total Pages
71 pages
Answer Key
Included
Teaching Duration
1 Week
Report this Resource to TpT
Reported resources will be reviewed by our team. Report this resource to let us know if this resource violates TpT’s content guidelines.