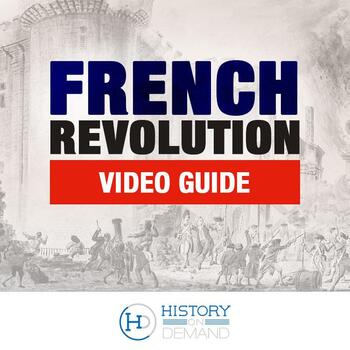 This narrative short answer fill-in-the-blank video guide was designed to accompany The History Channel’s wildly popular The French Revolution video. The guide covers the video through its entire 90 minutes and focuses on the most important aspects of this period, including:

This fascinating video is very interesting and engaging and works well for students from middle through high school. It can be used as a supplement to a unit or PowerPoint such as the one in store The French Revolution PowerPoint and Outline, or as a stand alone mini-unit on the French Revolution. I would be ideal for virtual learning. The video may be purchased on the History Channel, Amazon, I-Tunes, or through free links available on YouTube.

The French Revolution PowerPoint and Outline

Total Pages
12 pages
Answer Key
Included
Teaching Duration
90 minutes
Report this Resource to TpT
Reported resources will be reviewed by our team. Report this resource to let us know if this resource violates TpT’s content guidelines.