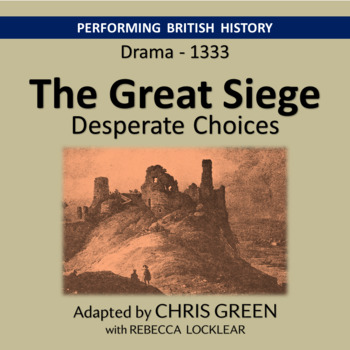 SUMMARY: In this mini-play, Scottish parents are forced to make deliberate choices during war with King Edward III of England in order to save their sons. Two versions of what might have happened are acted out before what really transpired is revealed. It prompts lots of discussion.

WHERE IS “The Great Siege” USED?

This is a fabulous skit that I've used many times that is based on a play written in the 1700s.

Check out "The Battle of Halidon Hill" which follows this skit. Even if you don't use it, the background information included is extensive and relates to this story.

✎“As a drama teacher, I liked using this scene because actors have to portray two versions of the same story – which is challenging. But I can easily see this used in an English class when the topic is times when parents (or others) have to make choices no one should have to make. This was a successful scene and I highly recommend it to others.” – Amazon customer

✦ FOLLOW ME ⭐ on TpT for news bits and sales!

© Rebecca Locklear. For single use only.

***NOTE: Although there is truth to this story, as per TpT policy, there's no negative impact on any individual or group.