The History of Russia - The Great Terror 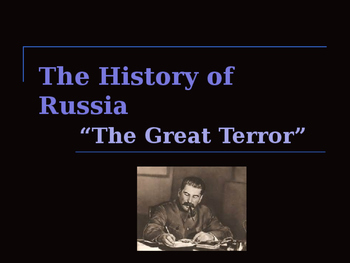 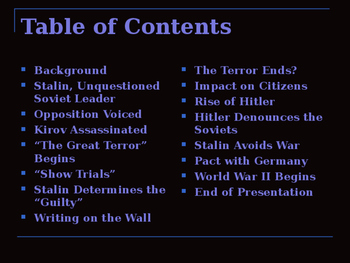 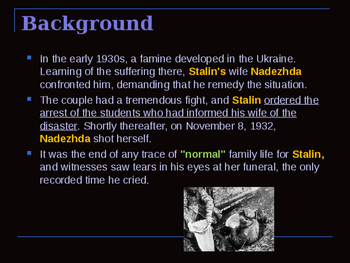 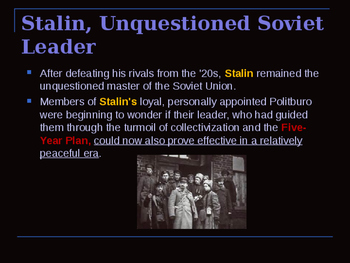 338 Followers
Follow
More products from Alta's Place
$3.99
Digital Download
Report this resource to TpT
Also included in:
Product Description
This is a 19 slide, highly animated, power point presentations on the History of Russia - The Great Terror. Each of the presentation slides are editable so you can change it to fit your individual needs.

After defeating his rivals from the '20s, Stalin remained the unquestioned master of the Soviet Union. Members of Stalin's loyal, personally appointed Politburo were beginning to wonder if their leader, who had guided them through the turmoil of collectivization and the Five-Year Plan, could now also prove effective in a relatively peaceful era.

Talk circulated about electing a new General Secretary, and Sergei Kirov, a member of the Politburo, was put forth as a possible candidate. Kirov rejected this notion, but at the Fifteenth Party Congress in 1934 many members expressed disapproval of Stalin's tight control, and a small percentage of the delegates actually voted against re-electing him the Central Committee.

Stalin began a series of aggressive moves to eliminate all forms of opposition to his rule. So began the "Great Terror," the period when Stalin effectively liquidated all traces of opposition to his rule. Large-scale purges struck the country, targeting all levels of society;-including children: Stalin reasoned that parents were more likely to confess to trumped-up charges of subversion and disloyalty if they knew their children's lives were at risk.

“The Terror” finally burnt itself out late in 1938, and at the Party Congress in March of the following year Stalin announced the end of the era of mass purges. But the campaign had caused lasting devastation--the exact numbers may never be known, but most historians estimate that millions of Russians were either executed or shipped off to the dreaded Siberian gulags between 1936 and '38.

This is one of many power point presentations I offer in my store under the heading.... the History of Russia.
Total Pages
19 slides
Answer Key
N/A
Teaching Duration
N/A
Report this Resource to TpT
Reported resources will be reviewed by our team. Report this resource to let us know if this resource violates TpT’s content guidelines.