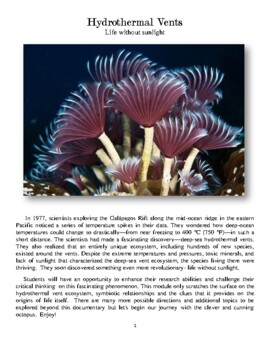 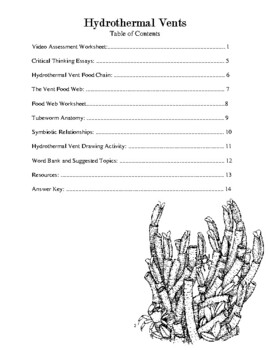 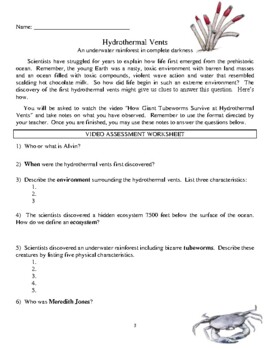 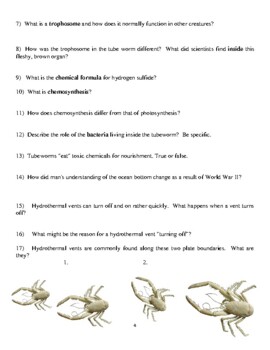 In 1977, scientists exploring the Galápagos Rift along the mid-ocean ridge in the eastern Pacific noticed a series of temperature spikes in their data. They wondered how deep-ocean temperatures could change so drastically—from near freezing to 400 °C (750 °F)—in such a short time and distance. The scientists had made a fascinating discovery—deep-sea hydrothermal vents. They quickly realized that they had stumbled across an entirely unique ecosystem, including hundreds of new species, existing around these toxic vents and nowhere else. Despite the extreme temperatures and pressures, toxic minerals, and lack of sunlight that characterized the deep-sea vent ecosystem, the species living there were not just living, they were thriving.  Scientists soon discovered something even more revolutionary- life without sunlight.

Students will have an opportunity to enhance their understanding of this unique ecosystem while highlighting some of the bizarre symbiotic relationships of the vent inhabitants. Students will practice their note taking and critical thinking skills, while delving into the phenomenon of life without sunlight and its implications on the origins of life itself. This comprehensive module focuses on the hydrothermal vent ecosystem, symbiotic relationships, adaptation and the clues that it provides on the origins of life itself. This module is geared towards middle and high school students in grades 7-11. Students in Earth, Environmental and General Science as well as Biology, Marine Biology and Oceanography will find this module captivating while opening the door to other related areas of interest. The use of personal electronic devices is highly recommended. The 21 page module includes the following components:

The video assessment is based on the video "How Giant Tubeworms Survive at Hydrothermal Vents" by I Contain Multitudes and is also readily available on YouTube.

Total Pages
21 pages
Answer Key
Included
Teaching Duration
1 Week
Report this Resource to TpT
Reported resources will be reviewed by our team. Report this resource to let us know if this resource violates TpT’s content guidelines.