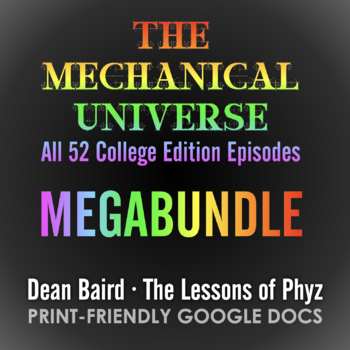 Products in this Bundle (52)

Question sets to accompany every episode of The Mechanical Universe (College).

This preview introduces revolutionary ideas and individuals from Copernicus to Newton, and links the physics of the heavens and the earth. [20 questions]

2. The Law of Falling Bodies

The function of mathematics in physical science and the derivative as a practical tool. [20 questions]

Galileo risked his favored status to answer the questions of the universe with his law of inertia. [16 questions]

Physics must explain not only why and how much, but also where and which way. [16 questions]

Newton lays down the laws of force, mass, and acceleration. [20 questions]

Newton and Leibniz arrive at the conclusion that differentiation and integration are inverse processes. [21 questions]

8. The Apple and the Moon

The first real steps toward space travel are made as Newton discovers that gravity describes the force between any two particles in the universe. [22 questions]

A look at the Platonic theory of uniform circular motion. [18 questions]

Shedding light on the mathematical form of the gravitational, electric, and magnetic forces. [215 questions]

A dramatic recreation of Millikan's classic oil-drop experiment to determine the charge of a single electron. [17 questions]

According to one of the major laws of physics, energy is neither created nor destroyed. [23 questions]

Potential energy provides a powerful model for understanding why the world has worked the same way since the beginning of time. [16 questions]

What keeps the universe ticking away until the end of time? [22 questions]

The music and mathematics of periodic motion. [21 questions]

Why a swaying bridge collapses with a high wind, and why a wine glass shatters with a higher octave. [18 questions]

With an analysis of simple harmonic motion and a stroke of genius, Newton extended mechanics to the propagation of sound. [18 questions]

An old momentum with a new twist. [20 questions]

From spinning tops to the precession of the equinoxes. [2 pages; 21 questions]

The discovery of elliptical orbits helps describe the motion of heavenly bodies with unprecedented accuracy. [15 questions]

The deduction of Kepler's laws from Newton's universal law of gravitation is one of the crowning achievements of Western thought. [20 questions]

The precise orbit of a heavenly body — a planet, asteroid, or comet — is fixed by the laws of conservation of energy and angular momentum. [18 questions]

Voyages to other planets use the same laws that guide planets around the solar system. [18 questions]

25. From Kepler to Einstein

From Kepler's laws and the theory of tides, to Einstein's general theory of relativity, into black holes, and beyond. [19 questions]

26. Harmony of the Spheres

A last lingering look back at mechanics to see new connections between old discoveries. [21 questions]

27. Beyond the Mechanical Universe

The world of electricity and magnetism, and 20th-century discoveries of relativity and quantum mechanics. [18 questions]

Eighteenth-century electricians knew how to spark the interest of an audience with the principles of static electricity. [15 questions]

Faraday's vision of lines of constant force in space laid the foundation for the modern force field theory. [17 questions]

Franklin proposes a successful theory of the Leyden jar and invents the parallel plate capacitor. [17 questions]

When is electricity dangerous or benign, spectacular or useful? [20 questions]

The work of Wheatstone, Ohm, and Kirchhoff leads to the design and analysis of how current flows. [19 questions]

Gilbert discovered that the earth behaves like a giant magnet. Modern scientists have learned even more. [18 questions]

The law of Biot and Sarvart, the force between electric currents, and Ampère's law. [16 questions]

Force fields have definite properties of their own suitable for scientific study. [24 questions]

The discovery of electromagnetic induction created an important technological breakthrough in the generation of electric power. [18 questions]

Electromagnetic induction makes it easy to generate alternating current while transformers make it practical to distribute it over long distances. [20 questions]

In 1887, an exquisitely designed measurement of the earth's motion through the ether results in the most brilliant failure in scientific history. [20 questions]

If the speed of light is to be the same for all observers, then the length of a meter stick, or the rate of a ticking clock, depends on who measures it. [16 questions]

Einstein is motivated to perfect the central ideas of physics, resulting in a new understanding of the meaning of space and time. [18 questions]

The new meaning of space and time make it necessary to formulate a new mechanics. [19 questions]

Hot discoveries about the behavior of gases make the connection between temperature and heat. [20 questions]

The Carnot engine, part two, with profound implications for the behavior of matter and the flow of time through the universe. [17 questions]

With the quest for low temperatures came the discovery that all elements can exist in each of the basic states of matter. [17 questions]

A history of the atom, from the ancient Greeks to the early 20th century, and a new challenge for the world of physics. [18 questions]

Evidence that light can sometimes act like a particle leads to quantum mechanics, the new physics.. [19 questions]

51. From Atoms to Quarks

Electron waves attracted to the nucleus of an atom help account for the periodic table of the elements and ultimately lead to the search for quarks. [20 questions]

A last look at where we've been and a peek into the future. [17 questions]

The student Google Docs files linked to in this product are suitable for use as Google Docs and for printing and photocopying.