The Niagara Movement and Black Lives Matter: Change or Continuity? 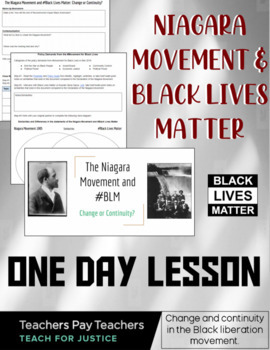 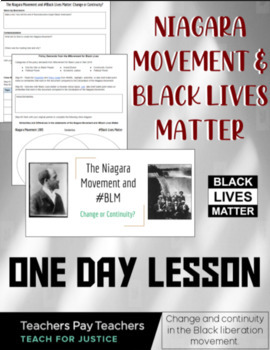 Students compare W.E.B. Du Bois's Niagara Movement Declaration with the policy platform of Black Lives Matter. The two documents that students analyze are separated by 115 years, yet the similarities in the basic demands are striking and will lead students to reflect on the stubborn pervasiveness of American racist policies.

This lesson forces students to confront anti-Black racist mythology that cites the end of slavery and the passage of the Civil Rights Act as proof that racism no longer exists in the United States. Students will compare and contrast the language of the W.E.B. Du Bois’ 1905 Niagara Movement Declaration with the 2020 policy demands of the Black Lives Matter movement. Students will also be able to explain the antiracist work of W.E.B. Du Bois’ Niagara Movements reaction to the racial injustice of the so-called “Progressive Age.”

This lesson is the perfect follow up to the week-long Niagara Movement Simulation, though it also works great as a stand-alone lesson.

This lesson should be used during the Progressive Unit.  Students should already have some knowledge about the failures of Reconstruction.  This lesson briefly covers the dispute between Booker T. Washington and Du Bois before comparing Du Bois’ Niagara Movement Declaration with the policy demands from the modern Movement for Black Lives Alternatively, this lesson could be used at the end of the year as a review of W.E.B. Du Bois work and an introduction to the Black Lives Matter movement.

Students will be exposed to experts of Black History who confront the continual progress framework. Historian Dr. James Loewen describes this period as the “nadir” of race relations in the United States and Historian Dr. Nell Irvin Painter describes the period following the failure of Reconstruction as a time of “re-enslavement” for Black Americans. Students will confront these realities as they make connections between the demands of the Niagara Movement and Black Lives Matter.

The lesson also lays the groundwork for future discussion later in the semester about the legislative and judicial war on the Civil Rights movement that has been waged since 1965.  Students will recognize that while antiracist progress was made during the Civil War and Civil Rights area, immediately following these events, consistent attacks began to chip away at that progress.

Total Pages
37 pages
Answer Key
Included
Teaching Duration
1 hour
Report this Resource to TpT
Reported resources will be reviewed by our team. Report this resource to let us know if this resource violates TpT’s content guidelines.

Log in
to see state-specific standards (only available in the US).
CCSSRH.11-12.10
By the end of grade 12, read and comprehend history/social studies texts in the grades 11-CCR text complexity band independently and proficiently.
CCSSRH.11-12.7
Integrate and evaluate multiple sources of information presented in diverse formats and media (e.g., visually, quantitatively, as well as in words) in order to address a question or solve a problem.
CCSSRH.11-12.6
Evaluate authors’ differing points of view on the same historical event or issue by assessing the authors’ claims, reasoning, and evidence.