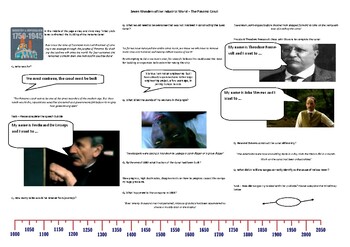 Worksheet to support the BBC TV Documentary on the building of the Panama Canal from the series: Seven Wonders of the Industrial World.

This episode presents the French and American efforts to build a canal through Panama to link the Atlantic Ocean with the Pacific Ocean. The first attempt to construct the canal by Ferdinand de Lesseps, the builder of the Suez Canal, was abandoned because of tropical diseases (which killed over 22,000 men) and the difficulty of constructing a sea-level canal through the mountains. The resulting financial scandals not only ruined de Lesseps and many investors, it also brought down the French government. The episode then takes up the story seventeen years later when the United States took up the challenge. A concentrated effort succeeded in eradicating the causes of the tropical diseases, but the attempt to build a sea-level canal once again failed. Instead the canal was built with locks.