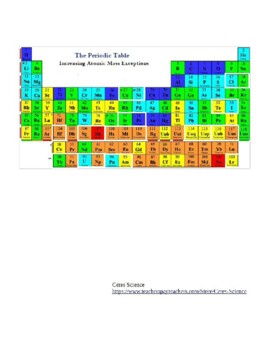 The elements in the periodic table created by Mendeleev in 1869 were organized in ascending order according to their atomic masses. Mendeleev, however, encountered a few problems. For instance, the element Tellurium (Te) had to swap places with the element Iodine (I), because the elements located in the same column were supposed to have similar properties, and Tellurium was not a halogen. The modern periodic table was proposed by Moseley in the year 1913, in which the elements were arranged by ascending atomic numbers (the number of protons in the nucleus), and this took care of the problems found in Mendeleev’s periodic table.

Teachers can used the periodic table shown in this activity to pinpoint all those places where a chemical element has a smaller atomic mass relative to the element before.

The link to many other science activities in TpT, including 85 that are free to download is the following: