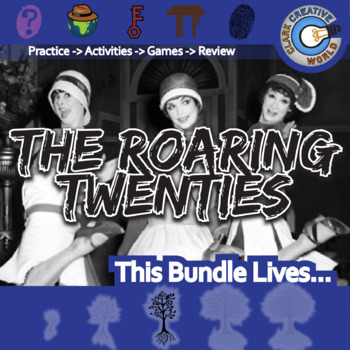 My Roaring Twenties worksheets and activities all in a money saving bundle! You save significant money and time versus purchasing these separately!

Included in this set are the following products which includes all of my Roaring Twenties Bio Spheres, Adventures, Whodunnits, TableTops, CSIs and Escapes,. The price is subject to increases as I add new items. Get it now, at its lowest point!

*Disclaimer* some of this content may overlap with other bundles

This product includes a license for one teacher only for personal use in their classroom. Licenses are non-transferable, meaning they can not be passed from one teacher to another. No part of this resource is to be shared with a colleague or used by an entire grade level, school, or district without purchasing the proper number of licenses. If you are a coach, principal, or district interested in transferable licenses to accommodate yearly staff changes, please contact me for a quote at teach@clarkcreativeeducation.com

This resource or answers to the questions may not be uploaded to the internet where it is publicly available in any form including classroom/personal websites, network drives or student Prezis (can be made private), unless the website or app is password protected and can only be accessed by students.

Thank you for respecting my work!