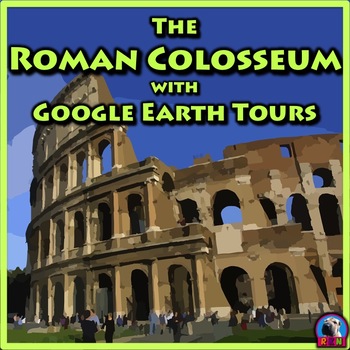 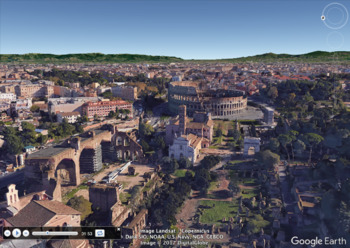 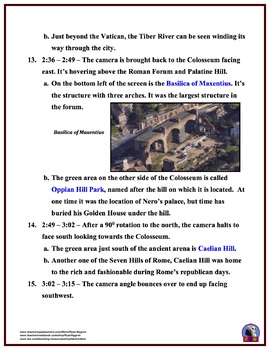 Make a virtual field trip to the Roman Colosseum, one of the planet’s most famous landmarks. You will be using Google Earth to watch a pre-recorded tour of the ancient arena and it’s neighboring structures. The trip through Rome lasts 5 minutes and 38 seconds.

Making cameo appearances on the trip are the Pantheon, the Roman Forum, the Vatican and the Spanish Steps, to name just a few.

The product includes a document of about 25 talking points and interesting facts about the tourist attraction.

1. For example the document says at,

a. The area to the west of the Colosseum is the Roman Forum with Palatine Hill just south of the forum.

i. The Roman Forum was the political and spiritual center of the ancient Roman Empire for centuries. Now it is an incredible archaeological site open to the public where you can see many ancient buildings, temples, basilicas, and more.

ii. According to Roman legend, the sons of the god Mars, Romulus and Remus, were raised on Palatine Hill and founded Rome here.”

The tour begins with a view of Europe from outer space. You are then zoomed in to the site’s location to see it from a variety of different viewpoints. The angles are chosen so the students can get a good idea of the structure’s location within Rome, as well as, its physical relationship to other famous landmarks in its vicinity. Finally, you are taken back out to a long shot of Europe.

To watch, all you have to do is click on the file, Google Earth will open and the tour will start. * Your computer must have Google Earth to watch these tours.

The cover image is by Clker-Free-Vector-Images and has a CCO Creative Commons license. The image can be found on Pixabay @ https://pixabay.com/en/colosseum-coliseum-gladiators-rome-295080/