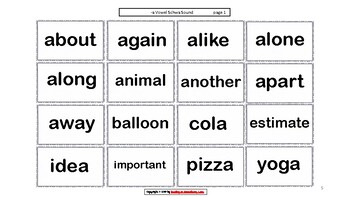 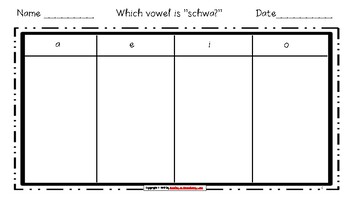 The Schwa Sound - The Third Sound of Vowels

This packet will give students a thorough understanding of the schwa sound.

When teaching reading, it is quite common for teachers to not know about the schwa sound and therefore, not know to teach it.  When a student is attempting to figure out the vowel sound in a word, and the vowel doesn’t say either its short nor long sound, then it is chalked up as not saying one of the normal foundational vowel sounds and is considered a vowel sound that does not follow the phonic rules.  When in reality, the vowel is saying the “unknown” schwa sound which is a phonic sound we all need to know if we’re a reading teacher.   The schwa sound is denoted by an upside-down e

It is a lazy sound and will occur on an unstressed syllable, and it’s sound is /uh/.

It is a good thing to know that a vowel sound really has 4 possible options for students to choose from when reading a word.

The vowel may say its short /i/ sound in bit.

The vowel may say its long /i/ sound in bite.

The vowel may copy another vowel’s sound such as -i saying long /e/ in “chili”.

The vowel may say the schwa sound /uh/ in “denim”.

Typically, it is best to teach the schwa sound the second semester of second grade.  By this point, the student knows the 10 foundational vowel sounds - the vowels’ 5 short sounds and the vowels’ 5 long sounds.  Therefore, when it is taught at this specific time, it does not confuse the students.

The schwa sound says /uh/ regardless if the vowel is -a, -e, -i, or -o.   It usually sounds a little weaker than the short sound of u.  I call the schwa sound the “third sound of vowels.”   I choose to teach the schwa sound when I teach the Open Syllable because it seems to appear in this syllable type quite often.   Also, you will find that the Schwa sound appears in the Closed Syllable quite a bit.

64 word cards are included in this packet, and all of the following words have a schwa sound.  On the key, I highlighted the schwa sound in each word.