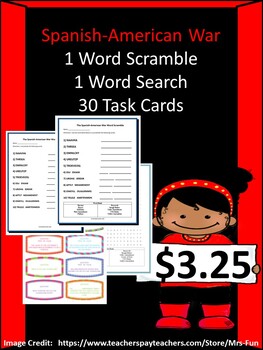 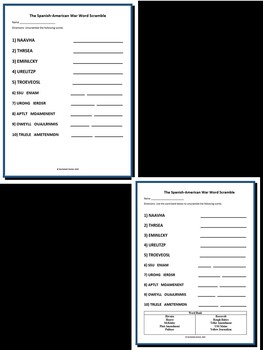 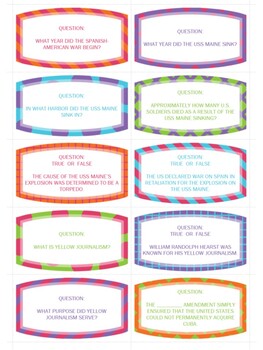 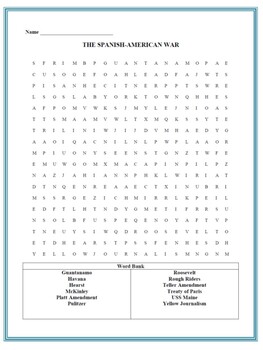 You will receive 30 task cards that cover topics from The Spanish-American War. Each card has the answers available so they can be easily ran through a copier and printed on the back side of the card. Topics covered include but are not limited to the following:

- What year did the Spanish-American war begin?

- In what harbor did the USS Maine sink in?

- What is Yellow Journalism?

- The ____________ Amendment was Legislation that gave the US the right to intervene if Cuba got into trouble.

- How much money did the u.s. give Spain for the Philippines when the war was over?

- Where was the location of the battle of San Juan Hill?

- Where did the u.s. first strike against Spain?

- Approximately how long did the first battle against Spain last?

You will receive 1 word search that includes key vocabulary words pertaining to The Spanish-American War. The following words appear on the word search:

You will receive 2 versions of this wonderful word scramble. 1 word scramble includes key vocabulary words pertaining to the Spanish-American War. The second version is almost identical to the first one except it contains a word bank to help those students that need that extra little boost. This item is a must in any classroom where differentiation is needed. The following words appear on the word scramble:

Total Pages
11 pages
Answer Key
Included
Teaching Duration
3 days
Report this Resource to TpT
Reported resources will be reviewed by our team. Report this resource to let us know if this resource violates TpT’s content guidelines.