"The Tale of Osiris & Isis" A Full Length Dramatic Play 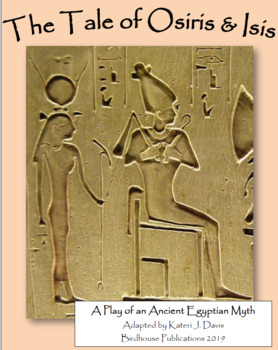 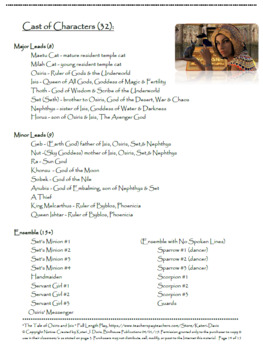 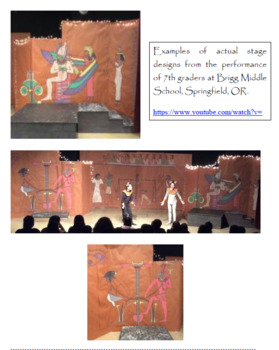 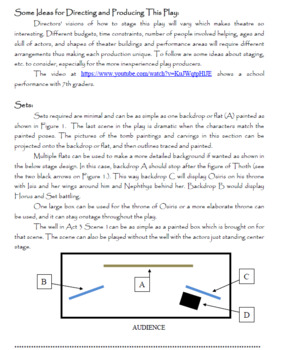 Product Description: "The Tale of Osiris & Isis" is adapted from the ancient Egyptian myth about the creation, death, and resurrection of the first Egyptian pharaoh, Osiris. Using historically accurate information on the myth but adapted for children, the play mixes adventure, humor, and conflict to interest all grade levels. Love and betrayal, with just enough violence and grossness to engage everyone. The characters will come alive for the actors and audience alike.

It is often hard for teachers to find an easily staged play to produce that allows a full class of students to have specific roles and actually perform onstage. Plus there's the difficulty of finding an affordable, interesting play to fit into history and language arts curriculum standards so they can give it instructional class time. This play fits the bill in all ways.

The play is perfect for young actors and gives all of them a chance to shine onstage. Most characters are speaking roles with at least a couple of lines. For actors who are timid about speaking in front of an audience, there are parts for dancers and those that are more physical as well. No special acting skills are required.

A 15-page director's guide is included with the 29-page script. The guide gives tips and suggestions for successfully producing the play and historical facts about the actual mythology on which this play is based.

A 7th grade performance of "The Tale of Osiris & Isis" can be seen on YouTube at https://www.youtube.com/watch?v=KuJWqtpHlJE.

Age: This play is written to be acted by middle school age children but can be used with upper elementary and high school ages. It is appropriate for audiences of all age levels.

o Cast size can reduced to a minimum of 21 with some doubling of roles.

o All other roles can be played by either male or female actors.

o Total of 26 speaking roles. (Some are one to three liners.)

o The Sparrows are dancing roles. the Scorpions are non-speaking, fighters. As many Sparrows and Scorpions roles as wanted can be added.

Synopsis: The story starts with the Earth and Sky having four children, despite Ra's wrath. Children Osiris and Isis fall in love, but fellow child Set is jealous and murders Osiris to take over the throne. Isis searches for her husband and finally finds Osiris' body. With her magical powers, Isis is able to create a child who grows and battles Set for the throne. After her son avenges Osiris, Isis is able to make Osiris alive, and they are united. Love and loyalty win.

The purchase of this play gives the purchaser the right to produce this play "The Tale of Osiris & Isis" in an amateur venue for an unlimited number of performances as long as the actors are all under the age of 19 and ticket prices are less than $5.00 per person. Please contact Kateri Davis at Birdhouse Publications, 694 P.O. Box, Creswell, OR 97426 if other arrangements are needed.

The purchaser of this play has the right to make one photocopy of the script for each actor.

The purchaser of this play agrees that only minor changes to the scenes and characters' dialogues will be done, and only if needed due to the number or genders of actors available. The original intent and integrity of each scene and the play itself cannot be effected. The roles specifically listed as male and female roles under the "Cast" section must be played as those genders.

The purchaser of this play has the right to upload pictures and videos of performances to YouTube and other online media as long as credit is given on each upload.

Other: A great companion product is Ancient Egyptian Theatre Mini-Unit at https://www.teacherspayteachers.com/Product/Ancient-Egyptian-Theatre-Mini-Unit-History-of-TheaterDrama-3281282.