The Vietnam War - My Lai Massacre 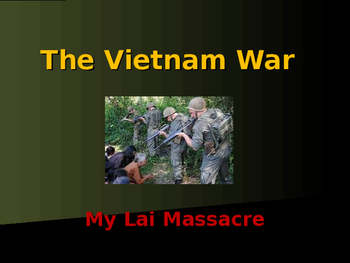 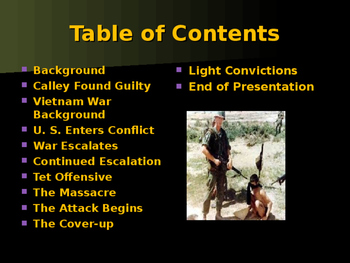 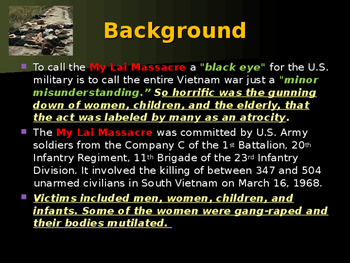 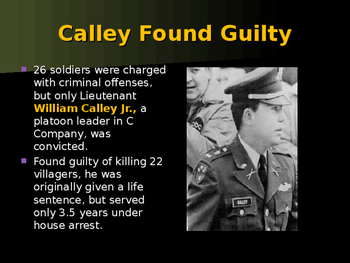 341 Followers
Follow
More products from Alta's Place
$2.79
Digital Download
Report this resource to TpT
Also included in:
Product Description
This is a 14 slide, highly animated, power point presentations on The Vietnam War - My Lai Massacre. Each of the presentation slides are editable so you can change it to fit your individual needs.

So horrific was the My Lai Massacre and the gunning down of women, children, and the elderly, that the act was labeled by many as an atrocity. It was committed by U.S. Army soldiers from the Company C of the 1st Battalion, 20th Infantry Regiment, 11th Brigade of the 23rd Infantry Division.

The massacre involved the killing of between 347 and 504 unarmed civilians in South Vietnam on March 16, 1968. Victims included men, women, children, and infants. Some of the women were gang-raped and their bodies mutilated. Initial investigations of the incident report stated that 20 civilians had been accidentally killed, but that 128 Vietcong also were killed.

A full year after the slaughter, soldier Ron Ridenhour wrote letters to President Nixon and 29 other officials, most of whom ignored his exposé. Representative Morris Udall did not. Lt. Calley was charged with several counts of premeditated murder, and 25 men were charged with related crimes. 2 months later, the information finally reached the American public.

Calley was convicted and sentenced to life in prison, but 2 days later, President Nixon released him and sent him to Fort Benning, GA, where he spent 3.5 years under house arrest. A federal judge then ordered him freed. Calley's conviction was the only one of the 26 men who had faced charges.

This is one of many power point presentations I offer in my store under the heading... Foreign Policy & Vietnam.