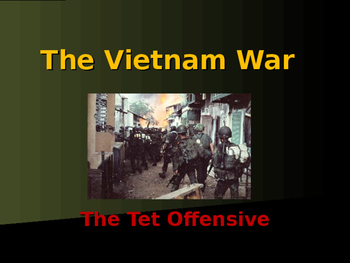 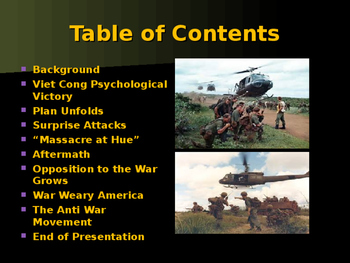 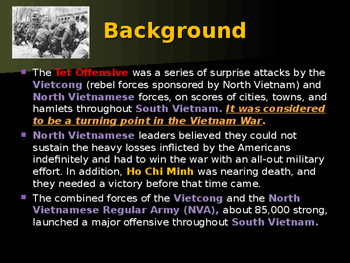 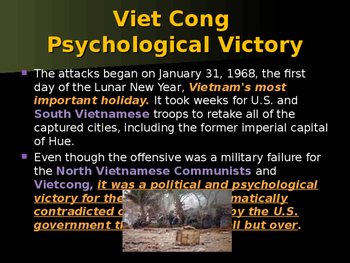 338 Followers
Follow
More products from Alta's Place
$2.49
Digital Download
Report this resource to TpT
Also included in:
Product Description
This is a 13 slide, highly animated, power point presentations on The Vietnam War - The Tet Offensive. Each of the presentation slides are editable so you can change it to fit your individual needs.

The Tet Offensive was a series of surprise attacks by the Vietcong (rebel forces sponsored by North Vietnam) and North Vietnamese forces, on scores of cities, towns, and hamlets throughout South Vietnam. It was considered to be a turning point in the Vietnam War.

North Vietnamese leaders believed they could not sustain the heavy losses inflicted by the Americans indefinitely and had to win the war with an all-out military effort. In addition, Ho Chi Minh was nearing death, and they needed a victory before that time came.

The combined forces of the Vietcong and the North Vietnamese Regular Army (NVA), about 85,000 strong, launched a major offensive throughout South Vietnam. The attacks began on January 31, 1968, the first day of the Lunar New Year, Vietnam's most important holiday. It took weeks for U.S. and South Vietnamese troops to retake all of the captured cities, including the former imperial capital of Hue.

Even though the offensive was a military failure for the North Vietnamese Communists and Vietcong, it was a political and psychological victory for them because it dramatically contradicted optimistic claims by the U.S. government that the war was all but over.

The Tet Offensive convinced many Americans that government statements about the war being nearly over were false. After 3 years of intense bombing, billions of dollars and 500,000 troops, the Viet Cong proved themselves capable of attacking anywhere they chose.

The message was simple: this war was not almost over. The end was nowhere in sight.

This is one of many power point presentations I offer in my store under the heading.....Foreign Policy & Vietnam.