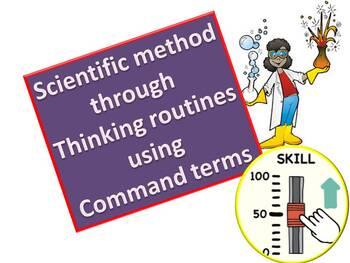 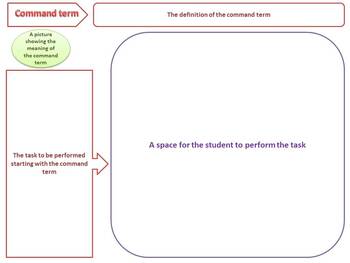 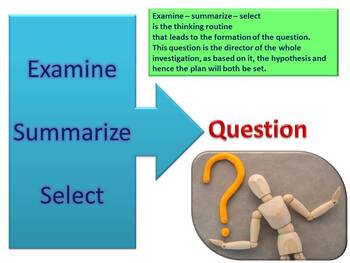 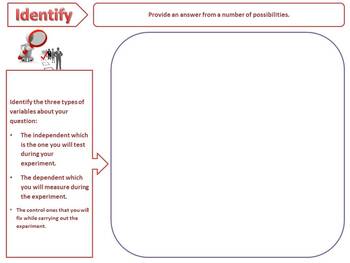 Following the scientific method is a big task that needs several stages to be finished, each of which requiring its own thinking skills.

Twenty seven clear tasks to perform in a logical order for the students to master the scientific method.

Each routine is described in one sheet, followed by three sheets one per task for the students to respond to. Each task starts with a command term, the definition of which is given.

The next page shows the general structure of the task sheet.

The whole kit can be printed out and given as hand out to the students. They go step by step performing the tasks and filling the response sheets, to end up doing the scientific method starting from the idea and ending up with writing the report.

Thinking routines are clusters of thinking skills that can be used together to chunk the process of thinking into several stages, so each one can be efficiently finished before moving on to the next stage.

Command terms are instructional verbs that each gives instructions for a specific task to perform. Each term is defined so the task is very clear. The definition for the command terms in this kit are the ones adopted by the IB organization.

When thinking routines are written using command terms, then students know exactly how to proceed when using it.

Not only that, knowing how to write thinking routines using the command terms enables the teacher to create his/her own one based on the need.

A word document has been added to summarize every thing in one sheet for the teacher's reference.

Log in
to see state-specific standards (only available in the US).
NGSSHS-PS2-3
Apply scientific and engineering ideas to design, evaluate, and refine a device that minimizes the force on a macroscopic object during a collision. Examples of evaluation and refinement could include determining the success of the device at protecting an object from damage and modifying the design to improve it. Examples of a device could include a football helmet or a parachute. Assessment is limited to qualitative evaluations and/or algebraic manipulations.
NGSSHS-PS1-3
Plan and conduct an investigation to gather evidence to compare the structure of substances at the bulk scale to infer the strength of electrical forces between particles. Emphasis is on understanding the strengths of forces between particles, not on naming specific intermolecular forces (such as dipole-dipole). Examples of particles could include ions, atoms, molecules, and networked materials (such as graphite). Examples of bulk properties of substances could include the melting point and boiling point, vapor pressure, and surface tension. Assessment does not include Raoult’s law calculations of vapor pressure.
NGSSHS-PS1-5
Apply scientific principles and evidence to provide an explanation about the effects of changing the temperature or concentration of the reacting particles on the rate at which a reaction occurs. Emphasis is on student reasoning that focuses on the number and energy of collisions between molecules. Assessment is limited to simple reactions in which there are only two reactants; evidence from temperature, concentration, and rate data; and qualitative relationships between rate and temperature.
NGSSMS-LS1-1
Conduct an investigation to provide evidence that living things are made of cells; either one cell or many different numbers and types of cells. Emphasis is on developing evidence that living things are made of cells, distinguishing between living and non-living cells, and understanding that living things may be made of one cell or many and varied cells.