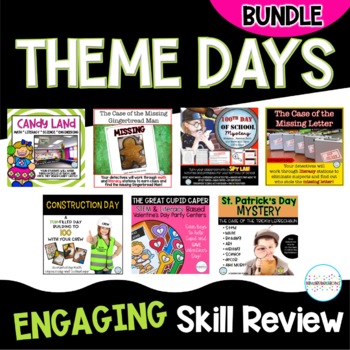 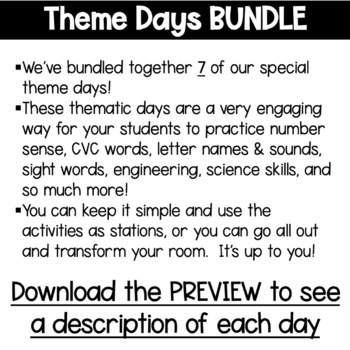 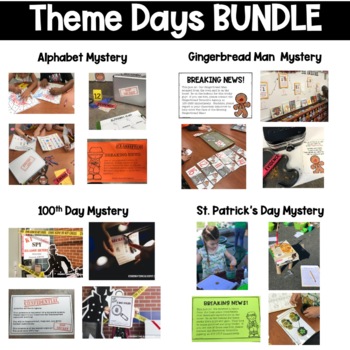 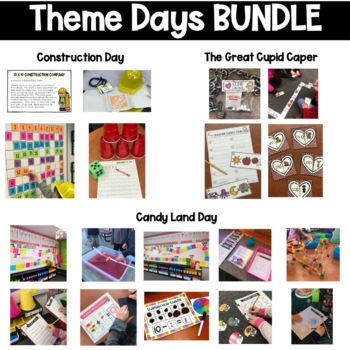 These thematic days are a very engaging way to review for assessments, celebrate classroom achievements or holidays, literacy and math centers, STEM days, or even for family engagement events.

There are a lot of options for how these thematic days can be used. They can be finished in centers, as independent practice, or even whole class. They can be completed a few at a time or all at once. The activities can be done in couple of hours, during a school day, or spread over a few days. You can transform your classroom for these special days, or keep it simple!

The Premise: The big idea is that someone broke all of Cupid’s arrows, stole his magic flying dust, and locked up the class’ Valentine’s Day treats. The students will complete stations in order to help Cupid get some new arrows and find a new way to fly. As each activity/task (station) is completed, the students will earn a paper key. Once all the stations have been completed, the class will earn the final key which will unlock their Valentine Day treats.

* Engineering an Arrow- Designing and building arrows for Cupid

* Cooking" an Arrow- Following directions to "cook" a healthy snack

The Premise: The idea is that students rotate through eight different lands (Skittle Swamp and Peppermint Pass are the same station/land) and complete tasks at each land. Each center lasts around 15-20 minutes. At the end of the station, the helper at the station pulls out the game card at that table. The picture on the game card shows which land they are rotating to next. When the game is over (they've completed all of the stations), students will get one final game card that will take them to Candy Castle where they will find a special treat (we had Smarties candy for each student).

The Problem: The letter Dd is missing! Your detectives will work through several differentiated literacy stations to eliminate suspects and find out who took the letter Dd.

The Premise: At the end of each round, your detectives will open their Top-Secret briefcase to reveal the Suspect Eliminator code breakers. Once solved, the code will eliminate one of the suspects until only one suspect remains. When the suspect is revealed, you will read a note to find out why the letter was taken and the treat that was left behind for solving the mystery.

The Case of the Missing Gingerbread Man

The Problem: The Gingerbread Man cookie you baked with your class is missing! Will your students be able to complete the centers and collect the clues that will lead them on a hunt to find the Gingerbread Man?

The Premise: Your students will turn into detectives as they become part of the Gingerbread Detective Agency. They will receive their detective badge and begin working through different centers and activities. After each center rotation is completed, your detectives will earn a clue that will help to unlock the secret code (on a locked box or sealed envelope) that will lead to them to the Gingerbread Man.

Once your detectives have completed the centers and collected the lock clues, they will be able to open the locked box or envelope. Inside of the box, will be a clue that sends them on a hunt for the Gingerbread Man. Each clue leads them to a different place on your campus. At the end of the hunt, they will find the cookie!

*Spin and Count- Counting objects to 20 and writing the numeral

*Cut and Glue Retell- Sequencing and retelling the gingerbread story

*Digraph Cookies- Sounding out and writing words with digraphs

The excitement begins when the students receive a note welcoming them to the 10x10 Construction Crew and requesting for them to report to their job site (their classroom) in the morning. After the students arrive, "clock in" and receive their crew badge, they will report and rotate through several "job sites" (centers). After completing the activity at their job site, students will receive a number to add to a giant 100's chart posted in the classroom as they build their way to 100.

* Building with 100 Blocks (designing a plan and building structures collaboratively)

The Problem: The students walk into a crime scene where Finnegan O'Malley, the leprechaun, has ransacked the classroom. Will they be able to the uncover clues that will lead them to the capture of that tricky leprechaun?

The Premise: Your students will turn into detectives as they become part of the Shamrock Detective Agency. They will receive their detective badge and begin working through different investigations to uncover clues that will lead to the tricky leprechaun. Once your detectives have completed the investigations and collected the clues, they will put them together to figure out where Finnegan O'Malley might be. With their Leprechaun Lookers in hand, your detectives will be off to find the tricky leprechaun. Of course he won't be caught, but they will find a special treat left behind for all their effort.

100th Day of School Mystery - Save Zero the Hero

The problem: Zero the Hero was kidnapped by Devious Agent 99 in order to stop the 100th from day from coming. Without the number zero, it will have to be day 99 over and over again.

The premise: Your students will turn into secret agents as they receive their secret agent badge upon entering the classroom. You will play a special PowerPoint presentation (for Mac users) or a YouTube video (for PC users) with a ransom note being read by another secret agent that will "self destruct" after it's heard! Once your agents have collected all the clues and put them together to figure out where Zero the Hero is being held, your agents will be off to look for him! Instead of finding Zero the Hero, they will find a special treat left as a reward for saving 100's Day.

The missions: Your secret agents will work through several missions (all involving the number 100). After they complete a mission, they are able to open up a clue from Devious Agent 99. The missions include:

*I Spy Numbers (Magnify It)

*Minute to Win It Activities (with the number 100)

*Making spy potions and "Hot on the Trail" Mix

Be sure to click on the star in the upper left corner of our store to follow us. You'll be able to see when we post freebies, add new products, and throw a sale!

If you have any questions, please e-mail us at kinderbrations@gmail.com.