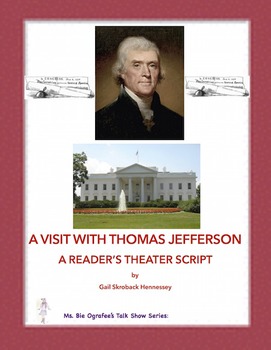 Use this Reader's Theater Script to learn about our 3rd President, Thomas Jefferson. Using the format of my Ms. Bie Ografee Talk Show Series, Jefferson is a guest on the show and audience members ask questions of her guest, Thomas Jefferson. In addition to lots of interesting information, there is a Did You Know? section, comprehension questions and a teacher page with extension activities, additional links and the key. The resource can be a one day activity or over several days if you decide to do some of the activities.

Total Pages
13 pages
Answer Key
N/A
Teaching Duration
40 minutes
Report this Resource to TpT
Reported resources will be reviewed by our team. Report this resource to let us know if this resource violates TpT’s content guidelines.