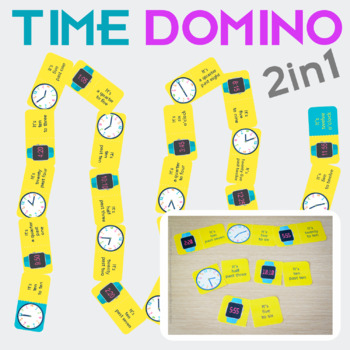 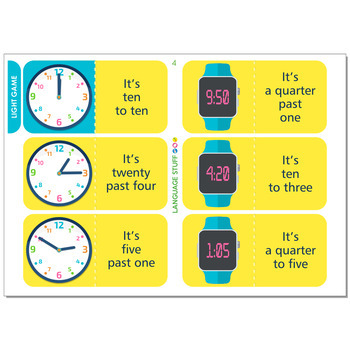 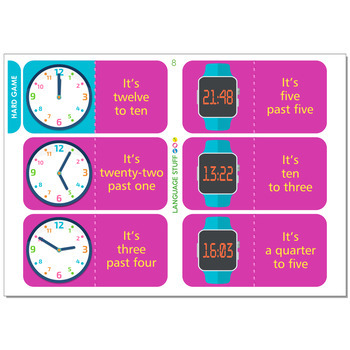 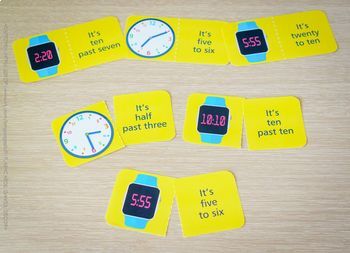 Amazing and helpful dominoes for practicing and reviewing “Telling the Time”. Includes 2 versions of dominoes with 24 cards each.

Shuffle the cards, deal the same number of cards between students. The player with a clock face on a blue background begins the game. S/he puts the card reading: It's ten to ten. Other players look at their cards and the one, who has the appropriate time on the watch, puts the card and reads another phrase: It's a quarter past one. The game is continued until the circle closes and all the players get rid of all cards.

- cut the domino cards into two parts and play memory or matching game:

Matching. Shuffle the clock faces and put them on the floor (or table), let kids choose the same number of phrases without looking at them beforehand. Then set the time limit and have them find all necessary pairs. Variation: deal the clock faces between the kids and shuffle the phrases, ask them to find the matching parts according to their clock faces;
Memory game. Shuffle all the cards. Put all them face down on the floor (or table), determine the order of the players in the game. Children take turns to open two cards and telling the time on the clock faces or reading the time written. If they match, the player keeps the cards and has another go, if they don’t the cards are turned over again and another child goes. At the end of the game you can ask children to tell the time or make short sentences with the target vocabulary (I have lunch at 12 o’clock in the afternoon. I go swimming at ten to three in the afternoon etc);

- hunting. Cut dominoes into two parts and hide clock faces or phrases in the classroom or at the playground, deal the remaining cards between all players, pairs or teams. The first to find the matching parts is the winner;

- play in pairs or in teams. Print two sets of dominoes, one for each team. The first team which puts the circle correctly is the winner;

- great for individual lessons. The child competes with himself, each time collecting a circle faster and breaking his own records.

► Print on cardstock and laminate for a durable use.