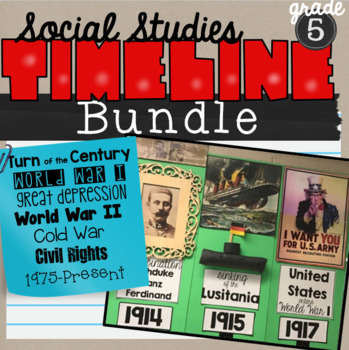 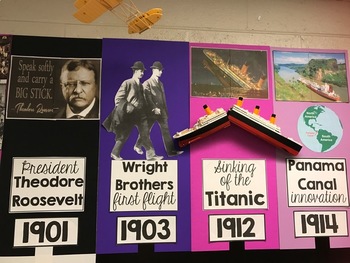 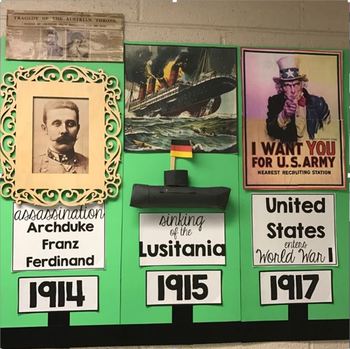 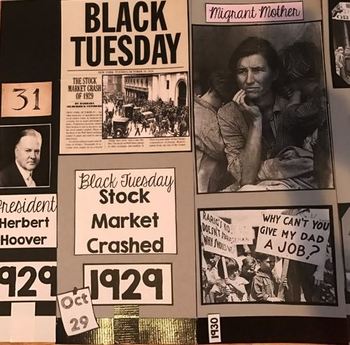 Need an outstanding visual that will anchor your students learning of historical events?

This product has everything you need to help you create a running timeline of events in your social studies units. You and your students will refer to it again and again throughout the year!

Hang it on your wall and watch it grow throughout the year as you go through each standard in your social studies curriculum.

Take it a step further and make it 3-D by adding props and student work!

Editable of you want to make changes or add events!

The timelines cover the following standards:

SS5H1 The student will describe how life changed in America at the turn of the century.

a. Describe the role of the cattle trails in the late 19th century; include the Black Cowboys of Texas, the Great Western Cattle Trail, and the Chisholm Trail.

c. Explain how William McKinley and Theodore Roosevelt expanded America’s role in the world; include the Spanish-American War and the building of the Panama Canal.

d. Describe the reasons people emigrated to the United States, from where they emigrated, and where they settled.

SS5H2 The student will describe U.S. involvement in World War I and post-World War I America.

a. Explain how German attacks on U.S. shipping during the war in Europe (1914- 1917) ultimately led the U.S. to join the fight against Germany; include the sinking of the Lusitania and concerns over safety of U.S. ships, U.S. contributions to the war, and the impact of the Treaty of Versailles in 1919.

b. Describe the cultural developments and individual contributions in the 1920s of the Jazz Age (Louis Armstrong), the Harlem Renaissance (Langston Hughes), baseball (Babe Ruth), the automobile (Henry Ford), and the airplane (Charles Lindbergh).

SS5H3 The student will explain how the Great Depression and New Deal affected the lives of millions of Americans.

b. Analyze the main features of the New Deal; include the significance of the Civilian Conservation Corps, the Works Progress Administration, and the Tennessee Valley Authority.

SS5H4 The student will explain the reasons for America’s involvement in World War II.

b. Describe major events in the war in both Europe and the Pacific; include Pearl Harbor, Iwo Jima, D-Day, VE and VJ Days, and the Holocaust.

e. Describe the effects of rationing and the changing role of women and African- Americans; include “Rosie the Riveter” and the Tuskegee Airmen.

f. Explain the U.S. role in the formation of the United Nations.

SS5H5 The student will discuss the origins and consequences of the Cold War.

a. Explain the origin and meaning of the term “Iron Curtain.”

b. Explain how the United States sought to stop the spread of communism through the Berlin airlift, the Korean War, and the North Atlantic Treaty Organization.

SS5H6 The student will describe the importance of key people, events, and developments between 1950-1975.

a. Discuss the importance of the Cuban Missile Crisis and the Vietnam War.

b. Explain the key events and people of the Civil Rights movement; include Brown

c. Describe the impact on American society of the assassinations of President John

d. Discuss the significance of the technologies of television and space exploration.

SS5H7 The student will trace important developments in America since 1975.

a. Describe U. S. involvement in world events; include efforts to bring peace to the Middle East, the collapse of the Soviet Union, the Persian Gulf War, and the War on Terrorism in response to September 11, 2001.

b. Explain the impact the development of the personal computer and the Internet has had on American life.