To Tell the Truth Game: Gandhi 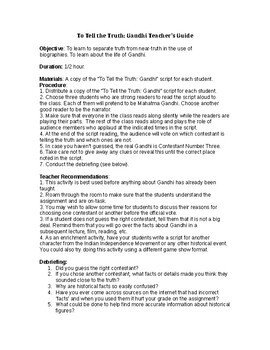 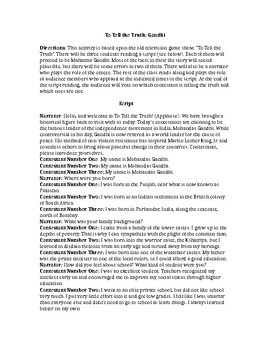 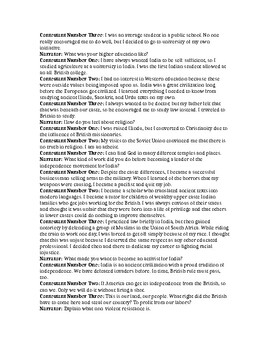 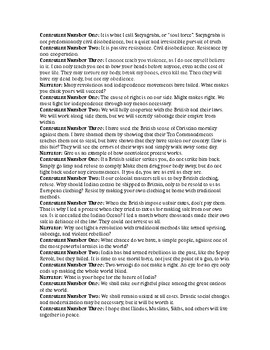 This activity is based upon the old television game show, “To Tell the Truth”. There will be three students reading a script. Each of them will pretend to be Mahatma Gandhi. Most of the facts in their life story will sound plausible, but there will be some errors in two of them. There will also be a narrator who plays the role of the emcee. The rest of the class reads along and plays the role of audience members who applaud at the indicated times in the script. At the end of the script reading, the audience will vote on which contestant is telling the truth and which ones are not. This activity comes from an established educational author who has published numerous social studies curriculum books. Copyright: Magnifico Publications, 2019.

Log in to see state-specific standards (only available in the US).
CCSSSL.9-10.3
Evaluate a speaker’s point of view, reasoning, and use of evidence and rhetoric, identifying any fallacious reasoning or exaggerated or distorted evidence.
CCSSSL.9-10.2
Integrate multiple sources of information presented in diverse media or formats (e.g., visually, quantitatively, orally) evaluating the credibility and accuracy of each source.
Total Pages
N/A
Answer Key
N/A
Teaching Duration
30 minutes
Report this Resource to TpT
Reported resources will be reviewed by our team. Report this resource to let us know if this resource violates TpT’s content guidelines.