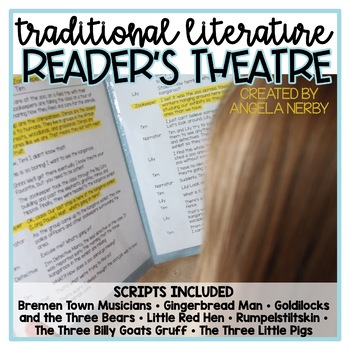 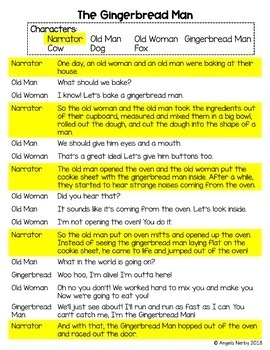 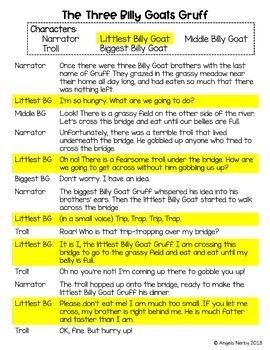 Reader's Theatre is a fun and engaging way for students to practice reading aloud with fluency and expression, as well as performing in front of an audience without the stress and pressure of memorizing lines. I use reader's theatre at the end of the school year to keep my students focused and learning, despite the end of the year craziness!

This bundle consists of seven scripts, totaling 38 parts. Mix and match the scripts to best meet the needs of your class!

The Bremen Town Musicians (7 parts): A donkey, dog, cat, and rooster leave their homes, meet up, and decide to go to Bremen to be town musicians. On the way there, they see a cottage and decide to stop for the night. Inside the cottage live two robbers. The animals start to sing, which scare the robbers from the cottage. They go inside, eat the robbers’ meal, and then go to sleep. When the robbers return, they startle the animals, who then scare away the robbers. The animals decide to live in the house and become famous musicians in the town of Bremen.

Goldilocks and the Three Bears (5 parts): Three bears that live in a cottage in the woods decide to go on a walk, and while they’re out, a girl named Goldilocks comes into their house and makes herself at home. She eats their food, sits (and breaks) their chairs, and tries out their beds, falling asleep in one of them. When the bear family gets home, they notice that their house is a mess. They discover Goldilocks in Baby Bear’s bed, and she is scared away.

Rumpelstiltskin (4 parts): A miller who lied to the king and said his daughter could spin straw into gold. The king calls her to the castle and locks her in the tower room filled with straw and a spinning wheel. He demands she spins the straw into gold. An impish creature appears and helps her over the next 3 days, in exchange for a piece of her jewelry. On the last day, she has nothing left to give him, so he says he will take her first born child. The daughter marries the king and they have their first baby. The creature comes back for the baby, but agrees that if the queen guesses his name in three days, she can keep her baby. On the third day, she goes for a walk in the woods and sees him dancing around a campfire and singing his name. When he returns, she “guesses” his name is Rumpelstiltskin. He gets so angry that he stomps his foot on the ground, making the earth crack open, and he falls into the crack, never to be seen again.

Three Billy Goats Gruff (5 parts): Three Billy Goat brothers are hungry, so they need to cross a river to get to a grassy field. The only way across is a bridge that is guarded by an angry troll. The first and second Billy Goat get to the other side by promising that their fatter and tastier brother is right behind them. When the biggest Billy Goat meets the troll, he uses his big horns to knock the troll into the rushing river. They can now go to the field whenever they like.

The Three Little Pigs (5 parts): This play is about three pigs who go off to live in the world. The first pig makes his house out of straw, the second out of sticks, and the third out of bricks. A Big Bad Wolf comes., wanting to eat the pigs for lunch. He blows down the first and second pigs’ houses, but luckily they escape. When he tries to blow down the third pig’s house, it is too strong. The wolf climbs onto the roof and tries to get in through the chimney. The pigs hear him coming and build a fire with boiling water, and when the wolf drops down, he is burned, shoots back up the chimney, and runs away, never to be seen again.

These scripts were written with end-of-the-year second graders' reading levels in mind. They are is shorter than most scripts written by big publishing companies, in order to keep the audience engaged for the whole performance (approximately 4-5 minutes to perform each play).

Each pack includes one script for each part with the lines highlighted, and one blank copy. Each script is a total of four pages, including the cover. To assemble the scripts, I take a 12" x 18" piece of construction paper and fold it in half. Then I glue the cover page on the front and the lines on the inside and back cover, and then laminate the booklets. I have also included name tags for each part. I turn them into signs my students hang around their necks, or you can make them into headbands/hats.

To see more of my Reader's Theatre scripts, CLICKE HERE!

If you have any questions about this product, please let me know!

Thanks for taking a look!

Total Pages
220 pages
Answer Key
Does not apply
Teaching Duration
N/A
Report this Resource to TpT
Reported resources will be reviewed by our team. Report this resource to let us know if this resource violates TpT’s content guidelines.