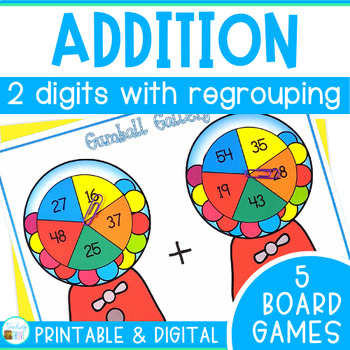 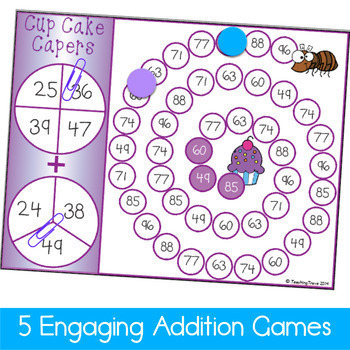 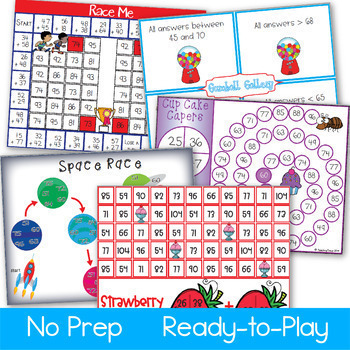 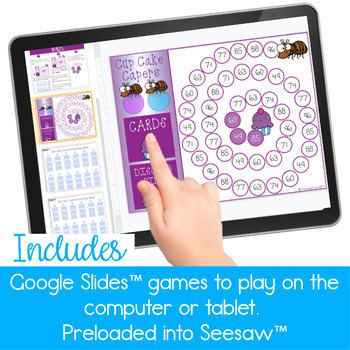 More motivating than a worksheet, your class will love this hands-on approach to consolidating double digit addition. Each game requires players to add 2 digit numbers and record the equation they've made before they can move on the game board. The self-correcting element of the games ensures that students get the answer correct or find their mistake if they've made one.

Just print each game with its illustrated rules (there's no cutting involved) and place them in your math centers. Include the recording sheets and collect them at the end of the session to include in student portfolios. You'll be provided with valuable data on who requires more support with 2 digit addition with regrouping.

Students can play in small groups independently or with minimal adult support. The non seasonal themes make these games perfect for your class to play all year long.

Players must spin and record their equation and then place a counter on the answer. The first player to get three numbers in a row is the winner.

Players travel around the game board, record their equation and place their counter on the answer. To win a player must make a trail from the pirate to the gold.

Players must spin an equation and record it. They may only move to the planet if the answer is there. The first player to reach the finish is the winner.

Players must spin and record their equation. They then move their counter either forward or backward to the closest answer.

Players must spin and record their equation. Each player who can match the answer to the code shown on their section of the game board can take a counter.

***You may prefer the bundled pack which includes 5 games with regrouping.***

Addition Games - 2 digit addition with and without regrouping

2 or 3 digit addition with and without regrouping – 6 games

2 digit addition without regrouping – 5 board games

2 digit addition and subtraction with regrouping

Become a follower and take advantage of my Early Bird Specials. All new products, excluding bundles, are 50% off for the first day of listing. Look for the green star near the top of any page within my store and click it to become a follower. You will then receive customized email updates about this store.