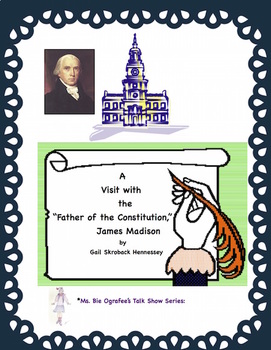 Part of my Ms. Bie Ografee series of plays, this Reader's Theater Script is on the "Father of the Constitution", James Madison(1751-1836), and his sharing with students the history of the writing of the Constitution. Madison who would become the 4th President of the United States(1809-1817)), played a very important role in the forming of our US Constitution. In addition to being a delegate, he introduced the first additions to the Constitution(amendments) which came to be known as the Bill of Rights. With 13 audience questioners, a Did You Know Section, comprehension questions, a Teacher Page with extension activities, key and additional links, students will learn about the writing of our important government document, the Constitution.

Activity for study on the Constitution!

Other Resources about Government:

1. You may have heard the word IMPEACHMENT being used in the news. Some people are talking about impeachment and the 45th president of the United States, Donald Trump. What exactly is impeachment? In U.S. History, only two presidents have had charges of impeachment. Use this webquest to learn more about how the founding fathers determined the use of impeachment in the U.S. Constitution and the history of impeachment. There are 10 web questions on this topic(including the Order of Succession and the Checks and Balances between the three branches of government). There is also a short Did You Know? section and several comprehension questions. The Teacher Page includes the key and several extension activities: What is this Word Called Impeachment: A History(Webquest)

4. President Andrew Johnson had a pet white mouse. President William McKinley had a pet parrot who was trained to whistle, "Yankee Doodle". President James Garfield was the first president to be left- handed AND could write with both hands(and different languages at the same time-Greek and Latin). George H W Bush liked eating pork rinds as a snack. President George Washington was a spelunker, a person that likes searching in caves. John F. Kennedy said, “And so, my fellow Americans, ask not what your country can do for you, ask what you can do for your country.” Use this presidential webquest to learn more about our presidents! Presidential Webquest

6. What is this event in the USA called an "Inauguration"?Taking the oath of office, a big parade and evening balls, Inauguration Day is a very busy day for the incoming President! There are 10 web questions, a Did You Know? section, comprehension questions and extension activities. This resource would be a great activity for around Inauguration Day to learn all about the history and festivities surrounding our country's inauguration procedures. It could be used as a Friday activity or when you are studying US Government and for Presidents' Weekend. History of Inauguration Day, A Webquest

Total Pages
15 pages
Answer Key
Included
Teaching Duration
40 minutes
Report this Resource to TpT
Reported resources will be reviewed by our team. Report this resource to let us know if this resource violates TpT’s content guidelines.