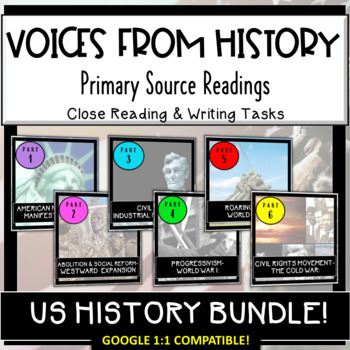 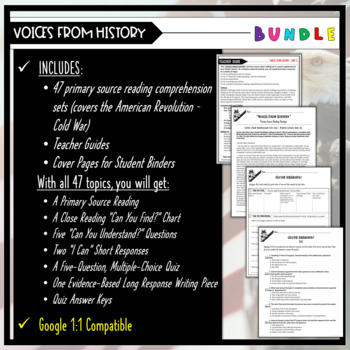 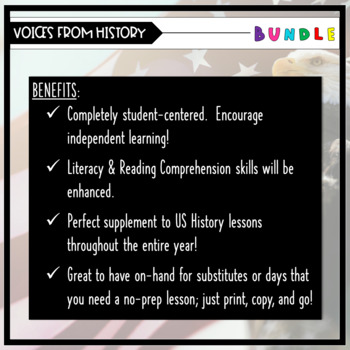 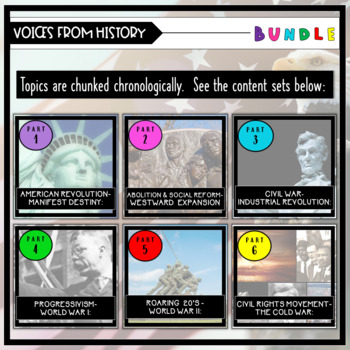 Student-Centered, Google Compatible, and requires NO PREP! This US History "Voices From History" Bundle is aligned with current educational standards and promotes literacy skills as well as independent learning. Students will remain engaged in the reading passages through the use of close-reading activities. This bundle includes 47 different primary source reading sets that span the length of a US History / American History course, beginning with the American Revolution and finishing with the end of the Cold War. Not only are these resources great to supplement your social studies lessons, but they are also helpful to have on-hand for substitutes, or to use for end-of-year review!

With each of the 47 topics, you will get:

*A Close Reading “Can You Find?” Chart

*Five “Can You Understand?” Questions

*Two “I Can?” Short Responses

-Excerpts from the Declaration of Independence

-Women's Rights (the Declaration of Sentiments, and Sojourner Truth's "Aint I a Woman?" speech - which could also tie to Abolition)

-Abolition Movement (a letter to abolitionist John Brown, and an article written by Frederick Douglass in the North Star)

-Anti-Lynching Campaign (Ida B. Wells at the National Negro Convention)

-World War I (Diary from the sinking of the Lusitania, and song lyrics- “Over There”)

-World War II (FDR asks for a declaration of war on Japan, and a story about Japanese Internment)

- McCarthyism (a telegram from McCarthy to President Truman)

-Death of JFK (NBC news report after the funeral)

-End of the Cold War (Reagan- “Tear Down This Wall” speech)

Spend a few more dollars, and score a bunch of student-centered resources for your US History class! Click here for the 'Make Life Easy' Bundle, and get this entire resource along with many more!

Thanks, and please provide feedback! Simply go to "My Purchases" in your account, find this resource, and click the text to provide feedback! Benefits? You get TpT $$ to use toward future purchases, and I get info. that is helpful for potential buyers. It's a win-win!