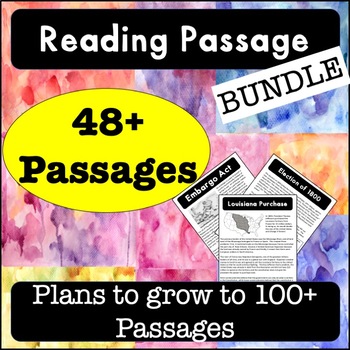 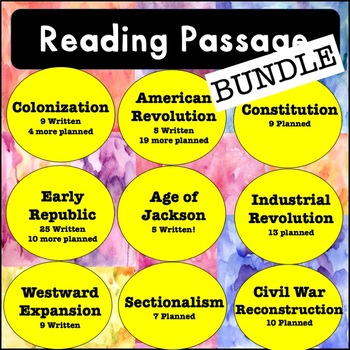 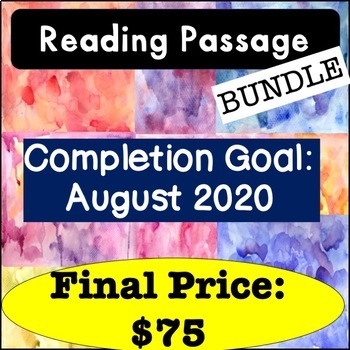 Products in this Bundle (55)

***39 of the articles have been updated to included google docs. The rest will follow I am averaging about 5 per day ***

This is a growing bundle, buy early to receive every new reading passage I post for free. I have plans to write and publish over 100 topics by August 2020. As I add new reading passages they will be available in your "my purchases" tab!

Finding aligned, grade level, reading passages is difficult. I have written a one-page synopsis for over 55 topics to use in the classroom. The activities include: guided reading questions to increase comprehension, a poster activity for ELLs and Visual learners, and an essay with one higher-order thinking prompt for advanced students.

This resource is perfect for:
Close Reading Strategies:
Using this passage students can analyze and interact with the text. Practice Summarization and Note-Taking, and content mastery. The passage is written at an 8th grade level and should be easily understood by all students in the classroom.

Centers and Stations:
In order to supplement other materials used in class this resource can be used as a station. Either have students read the passage and answer questions, make a poster or outline an essay. Regardless how you use the resource it will provide enough material for a 10-15 minute rotation station.

Homework:
Having students read the passage at home and complete the activities will reinforce the concepts that you have taught in class. This resource is an print and go homework assignment.

Emergency Sub Plans:
The four activities in this resource will easily a student an entire class period to complete and provide meaningful work for the students to complete while you are out of the classroom

Re-Teach and Intervention:
If you have students struggling with material these grade-level activities will help your students refresh what they have learned and process the information. It works great with absent students as well!

Collaboration:
Students can use this text to complete a socratic seminar or compare their posters to enhance collaboration in the classroom.

Check out other reading passages in the series:

Battles of the American Revolution:

Rise of Jackson and Battle of New Orleans (+Google Docs)

Sectionalism: The Road to Civil War