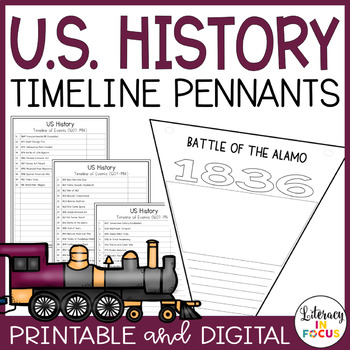 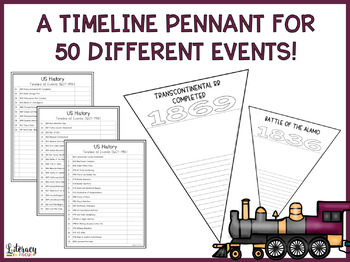 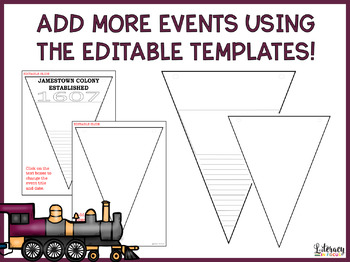 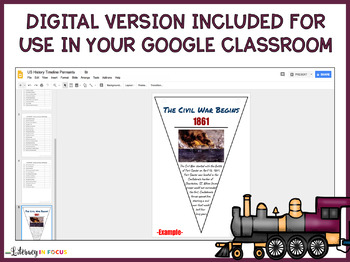 Review learning with this editable US History timeline activity! Full-size pennant flags covering 50 major events in U.S. history from 1607-1914 are included! Each pennant flag template highlights a major U.S. event and the corresponding historical date. Students are required to provide a short summary and illustration of the event in the designated space provided. Two editable blank flag templates are also included for you to add your own events. The timeline can be created at any point in the year, and it would look great for Back to School Night or Open House!

This resource is editable, printable, and digital! The digital version can be completed online with laptops, Chromebooks, tablets, or any device that supports Google Slides. The included Digital Guide includes access to the link that will allow you to make your own copy of the resource for use in Google Classroom/Google Drive.

WHAT TEACHERS ARE SAYING ABOUT THIS PRODUCT:

♥ Perfect to review timelines and display what we have learned!

INCLUDED WITH YOUR PURCHASE:

Editable Blank Pennant Templates: Two blank pennant flag templates are included for use with additional dates or any other creative teaching ideas!

Editable Event Lists: An editable event list is included for you to use as needed. There is space to add student names to particular events and room to input additional historical dates.

50 Major U.S. Events Pennant Templates: Each pennant flag is one page in size. The banner flags are ready to print and include the following major events in U.S. history:

Want a FREE resource each month? Click on the green star to follow Literacy in Focus, and you will be sent the monthly freebie!

Log in
to see state-specific standards (only available in the US).
CCSSRH.6-8.7
Integrate visual information (e.g., in charts, graphs, photographs, videos, or maps) with other information in print and digital texts.