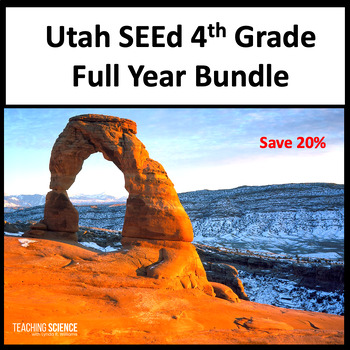 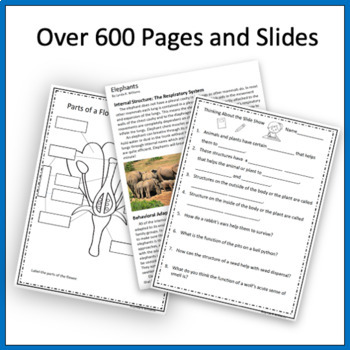 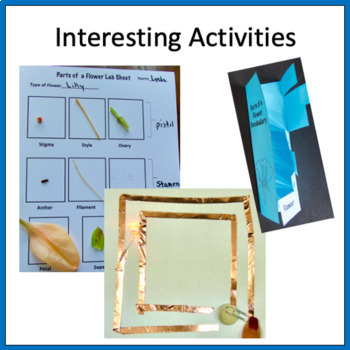 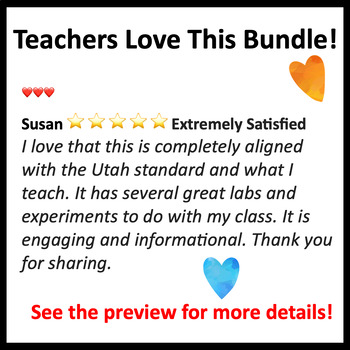 This Bundle for Utah SEEd 4th grade includes science resources for each strand and standard. Each unit included addresses specific Utah SEEd standards for 4th grade. This bundle also includes an assessment that can be used at the end of each strand. Save 20% by purchasing this as a bundle. Save lots of time by purchasing from someone who really understands Utah SEEd. I have a great deal of experience teaching Utah SEEd standards and science methods courses in Utah. My resources include research-based practices such as using phenomena to engage students, crosscutting concepts, and science and engineering practices. Check out my website to find out more about my credentials. Lynda R. Williams

Strand 4.1: ORGANISMS FUNCTIONING IN THEIR ENVIRONMENT

Strand 4.4: OBSERVABLE PATTERNS IN THE SKY

This bundle is just the science standards and is different than my other Utah SEEd Huge Bundle for fourth that also includes reading informational text units. The two bundles do not include the same exact items, so please look carefully at what is included in each bundle before selecting which one to purchase. If you have questions about which one to purchase, you can contact me at lywilliams1@gmail.com.  I also am willing to create a custom bundle for you.  Bundles are 20% off the price they would normally be.

This bundle covers all the standards for Utah SEEd 4th-grade with interesting units that include labs, hands-on activities, slide shows, reading passages, response pages, worksheets, and assessments. My Utah SEEd resources use phenomena and engage students in the science and engineering practices and the crosscutting concepts.

These standards are covered:

Construct an explanation from evidence that plants and animals have internal and external structures that function to support survival, growth, behavior, and reproduction. Emphasize how structures support an organism’s survival in its environment and how internal and external structures of plants and animals vary within the same and across multiple Utah environments. Examples of structures could include thorns on a stem to prevent predation or gills on a fish to allow it to breathe underwater. (LS1.A)

Utah SEEd Standard 4.1.2
Develop and use a model of a system to describe how animals receive different types of information from their environment through their senses, process the information in their brain, and respond to the information. Emphasize how animals are able to use their perceptions and memories to guide their actions. Examples could include models that explain how animals sense and then respond to different aspects of their environment such as sounds, temperature, or smell. (LS1.D)

Utah SEEd Standard 4.1.3
Analyze and interpret data from fossils to provide evidence of the stability and change in organisms and environments from long ago. Emphasize using the structures of fossils to make inferences about ancient organisms. Examples of fossils and environments could include comparing a trilobite with a horseshoe crab in an ocean environment or using a fossil footprint to determine the size of a dinosaur. (LS4.A)

Utah SEEd Standard 4.2.1
Construct an explanation to describe the cause and effect relationship between the speed of an object and the energy of that object. Emphasize using qualitative descriptions of the relationship between speed and energy like fast, slow, strong, or weak. An example could include a ball that is kicked hard has more energy and travels a greater distance than a ball that is kicked softly. (PS3.A)

Utah SEEd Standard 4.2.2
Ask questions and make observations about the changes in energy that occur when objects collide. Emphasize that energy is transferred when objects collide and may be converted to different forms of energy. Examples could include changes in speed when one moving ball collides with another or the transfer of energy when a toy car hits a wall. (PS3.B, PS3.C)

Utah SEEd Standard 4.2.3
Plan and carry out an investigation to gather evidence from observations that energy can be transferred from place to place by sound, light, heat, and electrical currents. Examples could include sound causing objects to vibrate and electric currents being used to produce motion or light. (PS3.A, PS3.B)

Utah SEEd Standard 4.2.4
Design a device that converts energy from one form to another. Define the problem, identify criteria and constraints, develop possible solutions using models, analyze data from testing solutions, and propose modifications for optimizing a solution. Emphasize identifying the initial and final forms of energy. Examples could include solar ovens that convert light energy to heat energy or a simple alarm system that converts motion energy into sound energy. (PS3.B, PS3.D, ETS1.A, ETS1.B, ETS1.C)

Utah SEEd Standard 4.3.1
Develop and use a model to describe the regular patterns of waves. Emphasize patterns in terms of amplitude and wavelength. Examples of models could include diagrams, analogies, and physical models such as water or rope. (PS4.A)

Utah SEEd Standard 4.3.2
Develop and use a model to describe how visible light waves reflected from objects enter the eye causing objects to be seen. Emphasize the reflection and movement of light. The structure and function of organs and organ systems and the relationship between color and wavelength will be taught in Grades 6 through 8. (PS4.B)

Design a solution to an information transfer problem using wave patterns. Define the problem, identify criteria and constraints, develop possible solutions using models, analyze data from testing solutions, and propose modifications for optimizing a solution. Examples could include using light to transmit a message in Morse code or using lenses and mirrors to see objects that are far away. (PS4.C, ETS1.A, ETS1.B, ETS1.C)

Utah SEEd Standard 4.4.2
Analyze and interpret data of observable patterns to show that Earth rotates on its axis and revolves around the Sun. Emphasize patterns that provide evidence of Earth’s rotation and orbits around the Sun. Examples of patterns could include day and night, daily changes in length and direction of shadows, and seasonal appearance of some stars in the night sky. Earth’s seasons and its connection to the tilt of Earth’s axis will be taught in Grades 6 through 8. (ESS1.B)

The slideshows and pages in this bundle are not editable. My work is protected and secure for copyright reasons.

Follow me and get news of my new resources.  Each new resource is discounted by 50% for the first 24 hours!

These resources are created by Lynda R. Williams  at Teaching Science

I have other great resources for Utah SEEd Standards Fourth

Total Pages
Over 600 pages and slides
Answer Key
Included
Teaching Duration
1 Year
Report this Resource to TpT
Reported resources will be reviewed by our team. Report this resource to let us know if this resource violates TpT’s content guidelines.