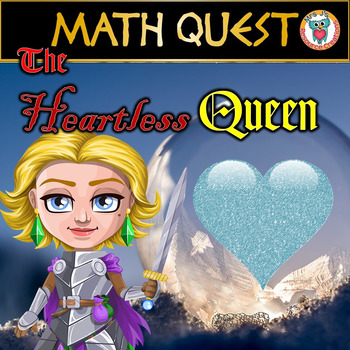 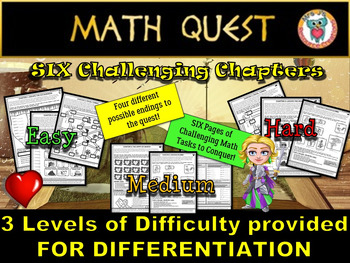 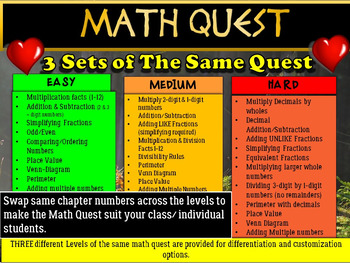 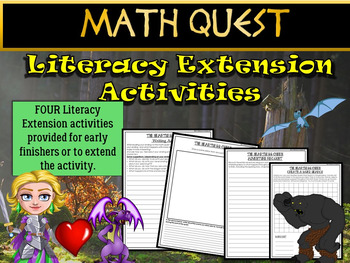 Send your students on an epic Math Quest with this fun story “The Heartless Queen”. This is a fun activity to get some extra math practice in or for your early finishers. With SIX exciting chapters to work through, students can end up with one of four possible endings as they try to help Athtar the Knight find and return the Ice Queen's heart back.

BONUS (Optional) Video of the introduction part of the story also included in this packet. In your download you will receive it so that it can be viewed without Internet connection, or it can also be viewed for free by clicking the link below -

This is a print, photocopy and go activity. The video hook is to be viewed before starting the paper part of this task to set the stage to engage. The math component of this activity is on paper, with each chapter presenting a part of the story and a math task/challenge or puzzle to 'progress' through the story. At the end, students are given choices, which leads to one of four alternative endings to the story.

Three levels of difficulty (EASY, MEDIUM, HARD) provided within this product so that you can differentiate this activity within your classroom. As long as the chapter number is the same, you can swap chapters across difficulty levels to tailor this math quest to best suit your class and/or individual student needs.

You can find the separate difficulty levels to purchase individually through the links below:

A variety of skills are covered throughout the chapters of this math quest. An overview of the skill required in each level provided below.

FOUR BONUS early finisher literacy activities added at the end to extend the activity if you wish.

Printable certificates provided to give to students who complete the Math Quest.

Great activity for the end of the year or around Valentine's Day.