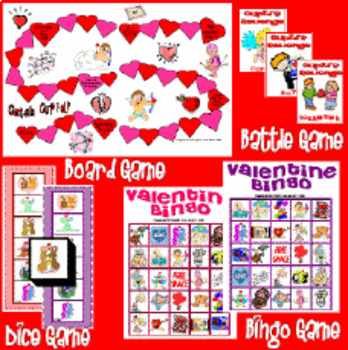 Contains: 5 game boards and call-out cards. To play, choose a call-out card. Every player finds the picture on his bingo board. The first person to cover 5 in a row yells out, "BINGO" and wins the game. There are many variations and ways to play bingo.

Each player receives a game board. Give each player 6 tokens or place markers of your choosing. Choose the player that will go first. The players take turns rolling the dice. When the player rolls a Valentine character that he has not covered with a token, he covers it. If he rolls a character he has already covered, he does not cover anything, and it is the next person’s turn. The first person to cover all of the characters wins.

The first person to catch Cupid is the winner! Fun idea: use conversation hearts as game markers!