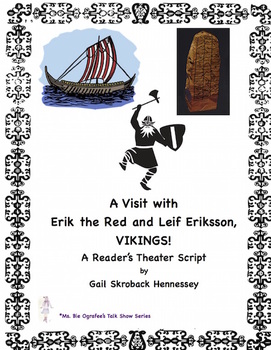 * There are different spellings for his name.

Studying the Vikings? Looking for a Reader's Theater Script in Social Studies? Check out this script on the Vikings and Leif Ericsson and his father, Erik the Red.

Part of my Ms. Bie Ografee Talk Show Series of plays, Leif Ericsson and his father, Eric the Red are guests on Ms. Bie Ografee's Talk Show. They share information about their lives and the Vikings. There is a Did You Know? section of fun facts, reading comprehension questions and a teacher section with lots of extension activities, links and the key.

2. Studying the Age of Exploration? This fun and informative webquest will be a great resource to use with your students(grades 4-8)

There are 14 questions and lots of extension activities and links. There are also comprehension questions to use after the completion of the web quest. The resource addresses several common core standards in social studies.Age of Discovery: A Webquest

3. Learn about Christopher Columbus with this informative play. There are 10 questioners asking questions of Columbus. Additionally, comprehension questions and discussion questions are included.

Use with a unit on the Age of Discovery or during October for Columbus Day. Christopher Columbus, A Reader's Theater Script

5. Use this informative Reader's Theater Script to learn about the Black Death, a disease that killed almost 1/2 the population of Europe in its worst outbreak(1347-1351). The fun/informative play uses the format of Simon, a victim of the Black Death, being a guest on Ms. Bie Ografee's talk show and the studio audience asks questions about his experiences during the time(the medical beliefs, the causes, the effects the Black Death had on Europe, etc. Great for a unit of study on the Middle Ages! Could be used in a science unit on bacteria and contagious diseases. Comprehension questions/extension activities, key. Black Death, A Reader's Theater Script

Note: Although my plays would probably take one class period, if you do some of the extension activities, the resource could be used over several days.

Total Pages
12 pages
Answer Key
Included
Teaching Duration
45 minutes
Report this Resource to TpT
Reported resources will be reviewed by our team. Report this resource to let us know if this resource violates TpT’s content guidelines.