Vocabulary Quiz Chapter 1B Realidades 2 for PDF and Google Slides 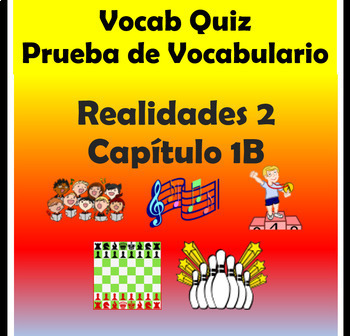 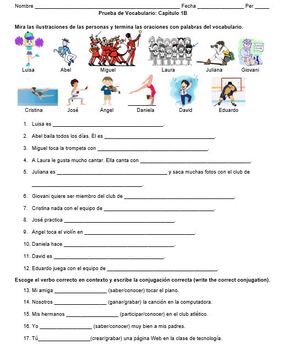 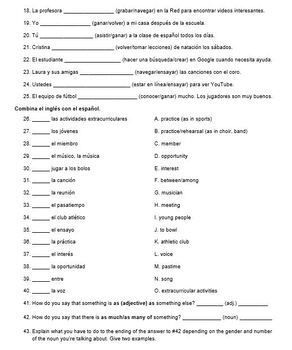 For the Google Slides I made text boxes over the lines so students can type in their answers. The underlying worksheet can't be deleted, but the text boxes can, so you may want to remind students that ctrl z will undo any mistake. Please make sure you are signed into your school Google account before you make the copy.

This quiz covers all of the vocab on the Repaso page of Realidades 2 chapter 1B except "¿Cuánto tiempo hace que . . . ?" and "Hace + time + que . . ." I also excluded "visitar salones de chat" because it's outdated. (I don't teach it to my students because I don't think chat rooms still exist.) I have deleted a few things for the preview and the thumbnails to avoid plagiarism, but you'll get a good idea of what's on the quiz by looking at them.

The quiz has three sections.

-The first section has illustrations of people doing things from the extracurricular activity vocab (such as singing, swimming, playing chess) with names underneath. Then there are sentences about each one in which students have to fill in the vocab word that corresponds to the picture. For example, there's a picture of a kid playing chess with "Giovani" underneath, and the sentence says, "Giovani quiere ser miembro del club de ___". There is not a word bank for these.

-The second section has the verbs, and students have to choose from two verbs in context and conjugate. For example, "Mis hermanos __________ (participar/conocer) en el club atlético." I've put in two for which the choices are saber/conocer, so they have to know the difference.

-The last section is matching, and it has mostly nouns. After the matching, there are three questions for tan/tanto that say:

Explain what you have to do to the ending of the answer to #42 depending on the gender and number of the noun you’re talking about. Give two examples.

You could use this resource as an actual quiz or as vocab practice. I've included a key.