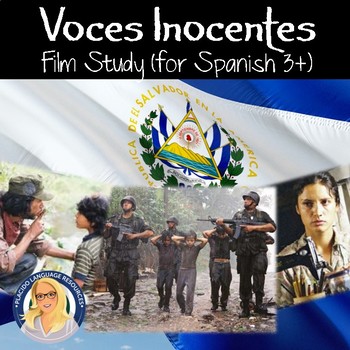 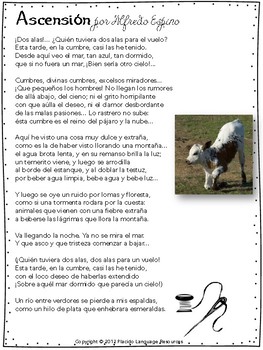 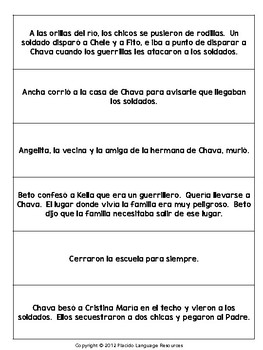 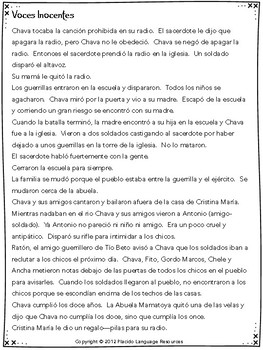 This extensive film study unit is designed to be used with upper-level students (I have used it with Spanish 3 and Spanish 4). I teach this film prior to beginning the study of the novel Vida y Muerte en la Mara Salvatrucha by Anonymous published by FluencyMatters.com.

This unit could take approximately 3-4 weeks depending on the amount of discussion you do with your students.

Contents of this packet:
• An embedded reading (3 parts) of the poem Ascensión by Alfredo Espino (this poem is read in the beginning of the film Voces Inocentes). In addition, there is a "using context" activity for the original version of the poem and a sheet with notes for the teacher on the original poem. See embeddedreading.com for more information on this technique.
• A reading of over 1,100 words summarizing the plot of the movie Voces Inocentes
• A movie viewing guide (students describe key characters and answer questions about the film)
• A set of “event cards” from the film and suggestions on how to use them
• A modified version of the 30 universal human rights designed to be used as a mini writing prompt or discussion starter (I also sell an additional generic version of this writing prompt. The writing prompt in this packet is specifically related to the movie Voces Inocentes.)
• A writing activity based on the 30 universal human rights and the film
• A quiz about the film
• A modified article about child soldiers as a current world issue
• Questions about the article
• 2 song activities (Casas de Carton and Niño Soldado)
• A word cloud to be used as a speaking or writing prompt


NOTE: This film is RATED R, so please preview before use and make sure you have approval from your administration before using it!


Total Pages
43 pages
Answer Key
Included
Teaching Duration
1 month
Report this Resource to TpT
Reported resources will be reviewed by our team. Report this resource to let us know if this resource violates TpT’s content guidelines.