Volcanos of the World Mapping Worksheet 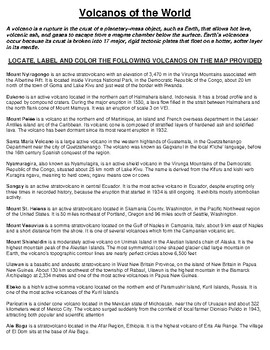 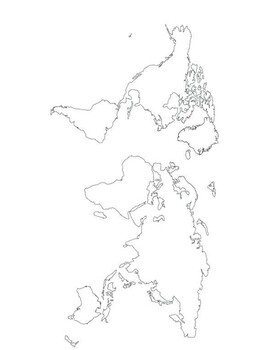 Students research, locate and label the following VOLCANOS on a world map

Mount Nyiragongo is an active stratovolcano with an elevation of 3,470 m in the Virunga Mountains associated with the Albertine Rift. It is located inside Virunga National Park, in the Democratic Republic of the Congo, about 20 km north of the town of Goma and Lake Kivu and just west of the border with Rwanda.

Dukono is an active volcano located in the northern part of Halmahera island, Indonesia. It has a broad profile and is capped by compound craters. During the major eruption in 1550, a lava flow filled in the strait between Halmahera and the north flank cone of Mount Mamuya. It was an eruption of scale 3 on VEI.

Mount Pelée is a volcano at the northern end of Martinique, an island and French overseas department in the Lesser Antilles island arc of the Caribbean. Its volcanic cone is composed of stratified layers of hardened ash and solidified lava. The volcano has been dormant since its most recent eruption in 1932.

Santa María Volcano is a large active volcano in the western highlands of Guatemala, in the Quetzaltenango Department near the city of Quetzaltenango. The volcano was known as Gagxanul in the local K'iche' language, before the 16th century Spanish conquest of the region.

Nyamuragira, also known as Nyamulagira, is an active shield volcano in the Virunga Mountains of the Democratic Republic of the Congo, situated about 25 km north of Lake Kivu. The name is derived from the Kifuru and kishi verb Kuragira ngavu, meaning to herd cows; ngavu means cow or cows

Sangay is an active stratovolcano in central Ecuador. It is the most active volcano in Ecuador, despite erupting only three times in recorded history, because the eruption that started in 1934 is still ongoing. It exhibits mostly strombolian activity.

Mount St. Helens is an active stratovolcano located in Skamania County, Washington, in the Pacific Northwest region of the United States. It is 50 miles northeast of Portland, Oregon and 96 miles south of Seattle, Washington.

Mount Vesuvius is a somma-stratovolcano located on the Gulf of Naples in Campania, Italy, about 9 km east of Naples and a short distance from the shore. It is one of several volcanoes which form the Campanian volcanic arc.

Mount Shishaldin is a moderately active volcano on Unimak Island in the Aleutian Islands chain of Alaska. It is the highest mountain peak of the Aleutian Islands. The most symmetrical cone-shaped glacier-clad large mountain on Earth, the volcano's topographic contour lines are nearly perfect circles above 6,500 feet

Ebeko is a highly active somma volcano located on the northern end of Paramushir Island, Kuril Islands, Russia. It is one of the most active volcanoes of the Kuril Islands

Parícutin is a cinder cone volcano located in the Mexican state of Michoacán, near the city of Uruapan and about 322 kilometers west of Mexico City. The volcano surged suddenly from the cornfield of local farmer Dionisio Pulido in 1943, attracting both popular and scientific attention

Ale Bagu is a stratovolcano located in the Afar Region, Ethiopia. It is the highest volcano of Erta Ale Range. The village of El Dom sits at the base of Ale Bagu.