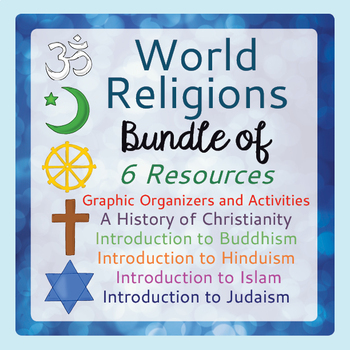 Diana Bailey
1.5k Followers
Follow
Easel Activities Included
Some resources in this bundle include ready-to-use interactive activities that students can complete on any device. Easel by TpT is free to use! Learn more.

World Religions Bundle of 6 Resources is priced at a discount and includes the following individual resources:

(Please note that the preview file, due to size restrictions does not include the preview for Hinduism and Christianity - they may be seen by going to their individual listings.)

I also have a larger 10 resource bundle, its links can be seen after the following description.

1) “World Religions - 10 Graphic Organizers and 4 Activities” was designed for use by World Religion and Social Studies/History teachers to help students organize basic facts about the religions of the world that have the highest number of adherents. The organizers are arranged in alphabetical order. They are: Buddhism, Christianity, Confucianism, Hinduism, Islam, Jainism, Judaism, Native Religions, Shinto, and Sikhism

--- The organizers are designed for students to do general research on each religion (one page per). They will need access to books and the Internet in most cases. I have included some useful websites in the teacher guide (see preview), as well as books I used to provide information in the Answer Key section. I have also included a template so that you or your students can add a religion simply by filling in the blanks on the sheet. There are four activities that greatly expand the possibilities of activities (and differentiation): Religious Festivals, Create a Pinning Board, Create a Webquest, and Compare and Contrast – One Religion/Two Sects.

2) The World’s Religions: A History of Christianity. This resource is about Christianity from the perspective of its history, rather than about its rituals and belief system. There are four one-page informational texts:

Each of the first three questions has a pre-reading question which can be used as a discussion point in class as well. Each passage has a separate page of questions that pertain to the text. The final question on the page is an opinion question and would be perfect to generate discussion after students have read the passage. Answer keys are included.

Finally, there is a page of four research topics, one for each passage. These may be assigned as a group or you may prefer students choose one or two to do. Students can use both books and the internet to help them formulate their answers. There are no answer keys for these topics.

3), 4), 5) and 6) Introducing Buddhism, Introducing Islam, Introducing Hinduism, and Introducing Judaism. Each of these resources includes two passages; the passages in the Buddhism unit are slightly shorter and have four vocabulary words on each page; Islam and Hinduism have two full-page passages with a post-reading vocabulary page. All three include a pre-reading survey and a set of questions to complete after the passages are read. Full answer keys are included for all objective questions.

The bundle also includes the free resource, a student survey on world religions: check out the link above.

I also have a small bundle of five student surveys which can be seen here:

This small bundle is NOT part of the 6 item bundle sold in this listing.

Newer resources now available! All my religion resources are included in the 10-item bundle, follow the links below: